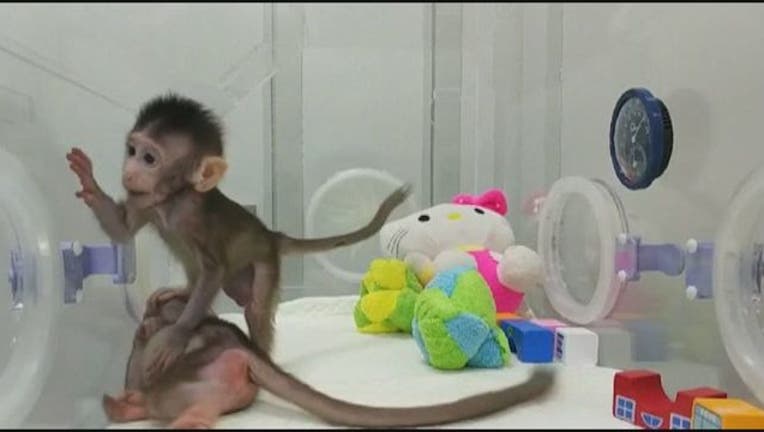 NEW YORK (AP) - For the first time, researchers have used the cloning technique that produced Dolly the sheep to create healthy monkeys, bringing science an important step closer to being able to do the same with humans.

Since Dolly's birth in 1996, scientists have cloned nearly two dozen kinds of mammals, including dogs, cats, pigs, cows and polo ponies, and have also created human embryos with this method. But until now, they have been unable to make babies this way in primates, the category that includes monkeys, apes and people.

"The barrier of cloning primate species is now overcome," declared Muming Poo of the Chinese Academy of Sciences in Shanghai.

In a paper released Wednesday by the journal Cell, he and his colleagues announced that they successfully created two macaques. The female baby monkeys, about 7 and 8 weeks old, are named Zhong Zhong and Hua Hua.

"It's been a long road," said one scientist who tried and failed to make monkeys and was not involved in the new research, Shoukhrat Mitalipov of Oregon Health & Science University. "Finally, they did it."

Poo said the feat shows that the cloning of humans is theoretically possible. But he said his team has no intention of doing that. Mainstream scientists generally oppose making human babies by cloning, and Poo said society would ban it for ethical reasons.

Instead, he said, the goal is to create lots of genetically identical monkeys for use in medical research, where they would be particularly valuable because they are more like humans than other lab animals such as mice or rats.

The process is still very inefficient - it took 127 eggs to get the two babies - and so far it has succeeded only by starting with a monkey fetus. The scientists failed to produce healthy babies from an adult monkey, though they are still trying and are awaiting the outcome of some pregnancies. Dolly caused a sensation because she was the first mammal cloned from an adult.

The procedure was technically challenging. Essentially, the Chinese scientists removed the DNA-containing nucleus from monkey eggs and replaced it with DNA from the monkey fetus. These reconstituted eggs grew and divided, finally becoming an early embryo, which was then placed into female monkeys to grow to birth.

The scientists implanted 79 embryos to produce the two babies. Still, the approach succeeded where others had failed. Poo said that was because of improvements in lab techniques and because researchers added two substances that helped reprogram the DNA from the fetus. That let the DNA abandon its job in the fetus, which involves things like helping to make collagen, and take on the new task of creating an entire monkey.

The Chinese researchers said cloning of fetal cells could be combined with gene editing techniques to produce large numbers of monkeys with certain genetic defects that cause disease in people. The animals could then be used to study such diseases and test treatments. The researchers said their initial targets will be Alzheimer's and Parkinson's.

Mitalipov, noting the Chinese failed to produce healthy babies from adult cells, said he suspects attempts to clone babies from a human adult would also fail. "I don't think it would be advisable to anyone to even think about it," he said.

Jose Cibelli, a scientist at Michigan State University, said it might be technically possible someday, but "criminal" to try now because of the suffering caused by the many lost pregnancies the process entails.

If the procedure became efficient enough in monkeys, he said, society could face "a big ethical dilemma" over whether to adapt it for humans. The key step of transferring DNA might be combined with gene editing to correct genetic disorders in embryos, allowing healthy babies to be born, he said.

Of course, the familiar image of human cloning involves making a copy of someone already born. That might be possible someday, but "I don't think it should be pursued," said researcher Dieter Egli of Columbia University. "I can't think of a strong benefit."

Henry Greely, a Stanford University law professor who specializes in the implications of biomedical technologies, said the strongest argument he can think of would be the desire of grieving parents to produce a genetic duplicate of a dead child. But he doubts that's a compelling enough reason to undertake the extensive and costly effort needed to get such a procedure approved, at least for "decades and decades."

Marcy Darnovsky, executive director of the Center for Genetics and Society in Berkeley, California, called it unethical to subject that new child to "the psychological and emotional risks of living under the shadow of its genetic predecessor." Human cloning could also require many women to donate eggs and to serve as surrogates, she said.

At the moment, because of safety concerns, federal regulators in the U.S. would not allow making a human baby by cloning, and international scientific groups also oppose it, said biomedical ethics expert Insoo Hyun of Case Western Reserve University in Cleveland.

People for the Ethical Treatment of Animals condemned the monkey-cloning experiments.

"Cloning is a horror show: a waste of lives, time and money - and the suffering that such experiments cause is unimaginable," PETA Senior Vice President Kathy Guillermo said in a statement.

Follow Malcolm Ritter at @MalcolmRitter His recent work can be found at http://tinyurl.com/RitterAP

This Associated Press series was produced in partnership with the Howard Hughes Medical Institute's Department of Science Education. The AP is solely responsible for all content.