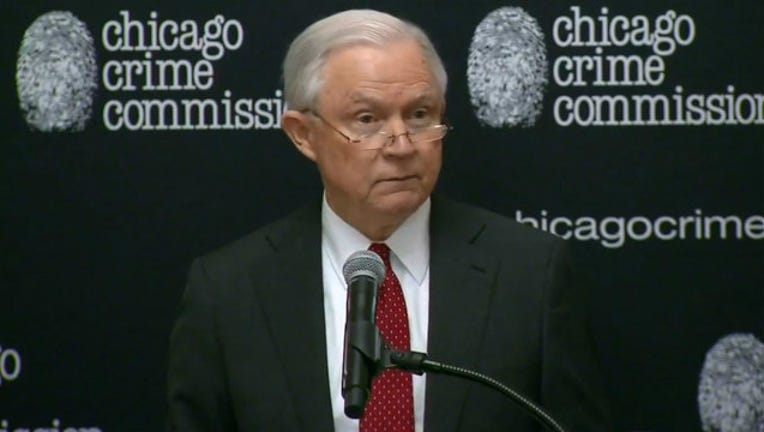 CHICAGO (AP) - Attorney General Jeff Sessions warned Friday that reforms planned for the Chicago police force could cause a surge in violent crime and pointed to the recent murder conviction of a police officer as evidence that such reforms aren't necessary because officers who break the law are already "prosecuted and jailed."

In a speech sponsored by the Chicago Crime Commission, Sessions reiterated statements he made a week ago when the Trump administration informed a federal judge that it was seeking to scuttle a proposed consent decree between the city and the state to of Illinois that calls for the department to be under close federal court supervision.

"Micromanaging the CPD through a federal court order isn't just unjustified, it's an insult," he said. "We do not need to treat Chicago's officers like some sort of rogue police department because of the actions of a few."

Sessions did not mention by name either Jason Van Dyke, the officer convicted of second-degree murder, or Laquan McDonald, the black teen he shot 16 times. But he spoke of a New York Times editorial supporting the consent decree that ran after the verdict.

In arguing against the consent decree, which includes strict rules on the use of deadly force by officer - Sessions pointed to the dramatic rise in violent crime in the city in 2016 and said it was caused by the city's agreement with the American Civil Liberties Union of Illinois to require officers to document thoroughly their traffic stops.

"The results of this agreement were catastrophic," he said. "There's just no other way to say it."

Sessions did not talk about the video of the McDonald shooting that led to the push for reforms of the police department or the U.S. Justice Department investigation under then-President Barack Obama that found a "pervasive cover-up culture" in the police department. He also did not mention that Van Dyke was the first city police officer to be convicted in an on-duty shooting in nearly a half century. Instead, he said that in 2014 "anti-police protests and movements arose, even getting support in the White House."

Sessions did not discuss the chances of stopping the consent decree from being implemented or the Justice Department's statement of interest filed last week. But the decree, which has the support of both Illinois Attorney General Lisa Madigan and Chicago Mayor Rahm Emanuel, is widely expected to be approved by a federal judge.

Sessions had nothing but praise for law enforcement in the city, with kind words for Police Superintendent Eddie Johnson, the U.S. Attorney in Chicago, John Lausch, and others.