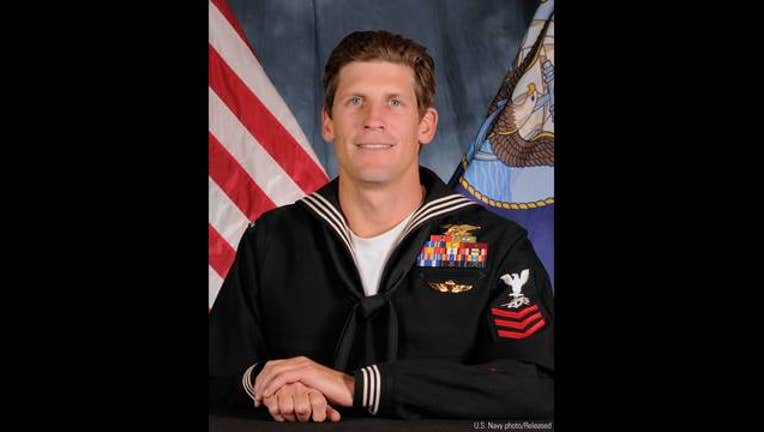 PHOENIX (AP) - In cross-country running, your team is only as fast as your slowest athlete. Slain Navy SEAL Charlie Keating IV took that to heart in his youth as a track star, turning around to cheer on his teammates after he crossed the finish line.

Those that knew Keating say it was that same force of character that motivated him in northern Iraq, where the 31-year-old was killed Tuesday in a gunfight with Islamic State militants. He was part of a quick reaction force that moved to rescue U.S. military advisers from attack, the Pentagon said Wednesday.

He is the third American serviceman to die in combat in Iraq since the U.S.-led coalition launched its campaign against the Islamic State group in summer 2014, military officials said.

Keating, a grandson of an Arizona financier involved in the 1980s savings and loan scandal, went to high school in Phoenix. Though known for his family name, he achieved his own status as a track and cross-country champion.

"He was my number one runner all four years, but he was always there cheering on and pushing the other runners," said Rob Reniewicki, Keating's former track coach at Arcadia High School.

Reniewicki recalled returning to school from running practice with Keating on Sept. 11, 2001. The terror attacks had a profound effect on Keating and the other high school sophomores.

"It kind of unfolded as time went by, but they really wanted to do something, they wanted to help out," Reniewicki said.

Keating decided at a young age he wanted to be in the Navy, hanging a SEAL poster on his bedroom wall when he was 8 or 9, said his mother, Krista Joseph, of Jacksonville, Florida. But he would only join if he could take a basic underwater training course, which would be his first hurdle to eventually becoming a SEAL, she said.

He didn't enlist until after he completed two years at Indiana University, where he competed on the track and cross-country teams.

Keating began SEAL training in 2007 and graduated the next year. He deployed twice in Iraq and once in Afghanistan, before serving as the leading petty officer of a sniper training cell. Keating was awarded several honors in his time in the Navy, including a Bronze Star, a Marine Corps Achievement Medal and an Army Achievement Medal.

"He was our golden boy, and he had a million-dollar smile. And he had the best luck in the world, and he always made it through everything, so that's why this is so shocking," his mother said.

Charlie Keating and his fiancée had already sent out invitations to their wedding.

"I have his wedding invitation on my refrigerator," Reniewicki said. "I was just going to get to see him, because I haven't seen him in a while because he's been overseas, and that was just devastating."

Keating will be remembered as a hero who "came from a long line of family members who served our country," said his cousin, Liz Keating, of Cincinnati.

His grandfather Charles H. Keating Jr., who died in 2014 at age 90, served prison time for his role in the costliest savings and loan failure of the 1980s.

Reniewicki's son, John, looked up to the athlete his father coached years earlier.

John Reniewicki is now a 20-year-old cross-country and track athlete attending Arizona State University. He and Keating kept in touch through social media over the years. Keating would offer supportive comments on track photos the younger Reniewicki would post.

"He had this way about him that was inspiring," John Reniewicki said. "He was my dad's first great runner, so I wanted to be just like that also."