LOS ANGELES - Police are on the hunt for a pair of smash-and-grab robbers they say stole items from a jewelry store in California Friday night.

The incident was reported just before 7 p.m. at a Kay Jewelers in the Brea Mall, about 25 miles southeast of downtown Los Angeles, police said.

The male suspects used hammers to break display cases at the jewelry store before they stole merchandise and fled the scene, the Brea Police Department tweeted. 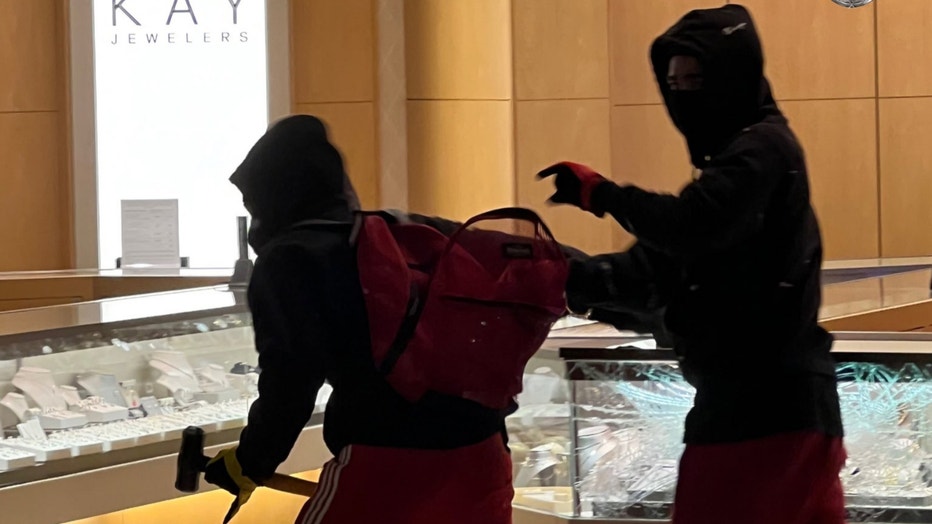 Police posted a photo of the suspects on Twitter, who they described as two Black males in their late teens or early 20s (Brea Police Department)

"The suspects are outstanding, and we ask that you avoid the Brea Mall area," the department wrote.

Some witnesses reported hearing gunshots, but police said they determined it was actually the sound of hammers striking the glass.

Police have yet to say if anyone was hurt during the robbery and as of early Saturday, no arrests have been announced.

Police posted a photo of the suspects on Twitter, who they described as two Black males in their late teens or early 20s, weighing 170 to 180 pounds. Police said they are between 5 feet 9 inches tall to 6 feet tall.

The city of Los Angeles has seen an increase in robberies and burglaries, which follows statewide trends of increasing crime since the COVID-19 pandemic. Last year saw a brash of organized criminal gangs targeting high-end retail stores in smash-and-grab robberies up and down the Golden State.

Police have yet to provide more information about Friday's smash-and-grab robbery.