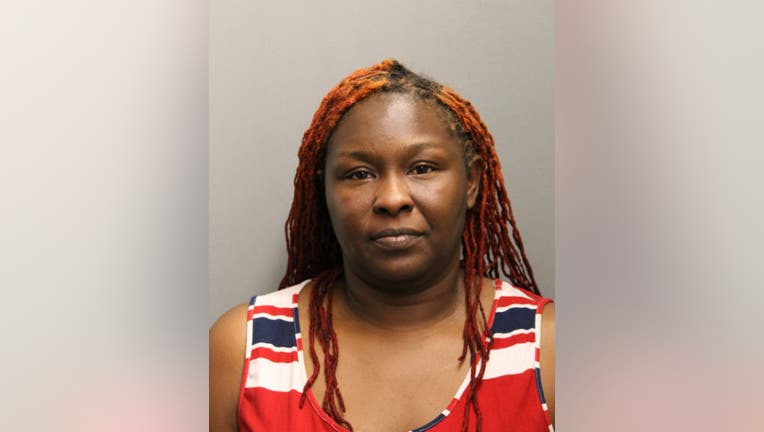 CHICAGO - A woman is facing a murder charge after a fatal shooting Monday in Englewood on the South Side.

Jacqueline Creekmore, 44, is accused of shooting her 43-year-old husband on Monday at 4:20 a.m. in the 6500 block of South Perry Avenue, according to Chicago police.

Kevin Neely, who was shot five times, was taken to the University of Chicago Medical Center and pronounced dead.

Creekmore was arrested about 9:55 a.m. the same day in the 7400 block of South Eggleston Avenue.

She was charged with first-degree murder, police said.

Creekmore fired the gun at her husband after finding him in a car with another woman a few weeks ago, Cook County prosecutors said Wednesday.

No one was injured in that incident.

Before he took his last breath, Neely made a "dying declaration," telling responding Chicago police officers his wife shot him, DeBoni said.

Neely, who was shot in his chest and thigh, died after he was transported to University of Chicago Medical Center.

The couple had a history of domestic disputes over Neely’s alleged infidelity. But it was not immediately clear what led to the deadly shooting, DeBoni said.

Earlier on Sunday night, Neely was hanging out in a front porch drinking and smoking marijuana with Creekmore and others. At some point, he gave the gun Creekmore eventually used to shoot him to another person at the gathering, asking her "to hang on to it," DeBoni said.

That person "wasn’t comfortable" holding the gun and gave it to Creekmore, DeBoni said.

By 2:30 a.m. Monday, Neely and Creekmore were left alone on the porch, DeBoni said.

A surveillance camera later recorded Neely’s car from a distance as it stopped at 73rd Street and Wentworth Avenue about two hours later. The footage showed the passenger door open slightly before the car "sped in a complete circle in the intersection" and crashed into a light pole, DeBoni said.

Neely and Creekmore were seen getting out of the car and arguing before Neely got into the driver’s seat, DeBoni said.

A witness heard Neely ask Creekmore if "she was going to grab the gun" and saw her with the gun before the shooting, DeBoni said. Another witness allegedly heard the shots and then heard Neely say he had been shot.

When Creekmore fired the gun three times before firing a fourth shot about a minute later, the shots were picked up by a ShotSpotter gunshot-detection system, DeBoni said.

Creekmore walked away and Neely tried to drive off before he crashed into a fence at Periwinkle Park in the 6500 block of South Perry Avenue, DeBoni said. Neely then collapsed after walking to a nearby porch.

An officer’s body-worn camera recorded Neely giving the officer Creekmore’s first name and saying she had shot him.

Creekmore was the victim of abuse by Neely — "a violent individual" who had served time in prison, an assistant public defender told Judge Mary Marubio Wednesday.

Creekmore is expected back in court July 7.