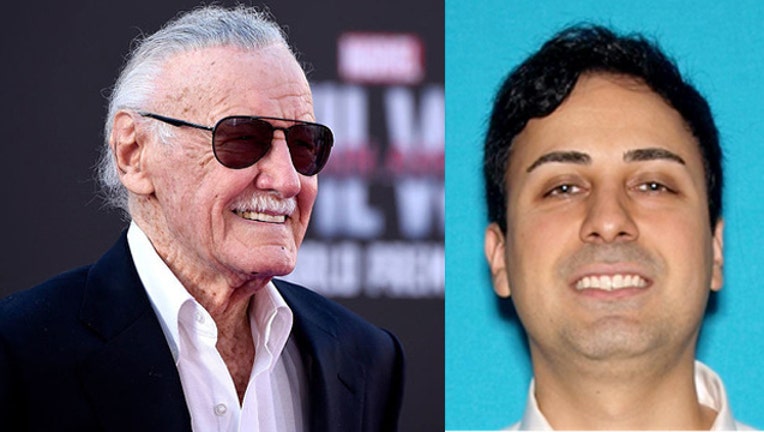 LOS ANGELES, Calif. (FOX 11) - Los Angeles police on Saturday said the late-comic book legend Stan Lee's one-time partner and business manager has been arrested on an outstanding arrest warrant, in a collaborative effort with the Scottsdale and Phoenix police departments in Arizona.

Keya Morgan, also known as Keyarash Mazhari, 43, was arrested Saturday morning, according to a statement released by the Los Angeles Police Department.

"Morgan will go before a judge and eventually extradited to Los Angeles to face charges," according to the statement. His bail was set at $300,000.

Morgan was facing one felony count of false imprisonment of an elder adult, three felony counts of theft, embezzlement, forgery or fraud against an elder and one misdemeanor count of elder abuse, according to the Los Angeles Superior Court's Public Information Office.

Lee, 95, died on Nov. 12, 2018 from pre-existing medical conditions, police said, and had been the victim in an elder abuse investigation that began in March 2018.

Last July, the former business manager told TMZ, "For over 10 years I have shown nothing but love, respect & kindness to Stan Lee, & his wife, a fact he has repeated countless times," and accused Lee's daughter and her lawyer of a "witchhunt" against him borne out of jealousy.

Police also said that it had been revealed that no one had clear authority to act on Lee's behalf, yet Morgan allegedly exerted his control and influenced Lee, who had a large estate worth more than $50 million.

According to court papers, law enforcement and Adult Protective Services officials went to Lee's home on May 30, 2018, to perform a "welfare check." Morgan allegedly arrived at the residence while Lee was being interviewed and security guards refused to let him.

At that point, Morgan "made a false 911 call, claiming that there were three unidentified burglary suspects in his friend's home who had locked everyone out of the house," according to the court documents.

Later that night, Morgan called 911 again, accusing a security guard at the home of assaulting him and Lee with a deadly weapon, according to court documents.

In April, Morgan pleaded no contest to the false report of an emergency and was placed in a diversion program for 12 months. He was also ordered to stay away from both victims in that case, security guards for Lee, as well as Lee's residence and to refrain from calling 911 other than in the event of an actual emergency, according to a spokesman for the City Attorney's Office.

Lee at one point requested an restraining order against Morgan, just days after insisting the man was his sole partner and business manager and that the two of them were "conquering the world side by side."

Earlier court documents filed by lawyers for Lee alleged in part that Morgan isolated Lee from his family and other associates, moved him out of his home and into a condominium and was exerting undue influence over him.

Police said during the course of their financial investigation, allegations of Grand Theft/Fiduciary Elder Abuse against Morgan had been made with regard to monies collected from business transactions (autograph signing sessions from May 10-12, 2018 totaling over $262,000) that Lee never received from Morgan.

The method of operation of financial-abuse opportunists is gaining the trust of the elder in hopes for the what may be a big pay-off in the long run.

Also, allegations of false imprisonment came into play from June 8-11, 2018, when Morgan allegedly removed Lee from his Hollywood Hills residence to a secured Beverly Hills condominium during the late night hours of June 8, 2018.

Lee was removed from Morgan's control on June 11, 2018 when Morgan was arrested by the department's Commercial Crimes Division detectives for allegedly generating false 911 calls on May 30th and May 31st 2108.

In both instances, police said Morgan was using this tactic to further deceive Lee into believing he was in danger and needed to be moved from his home to a more secured condominium where Morgan had more control over Lee.