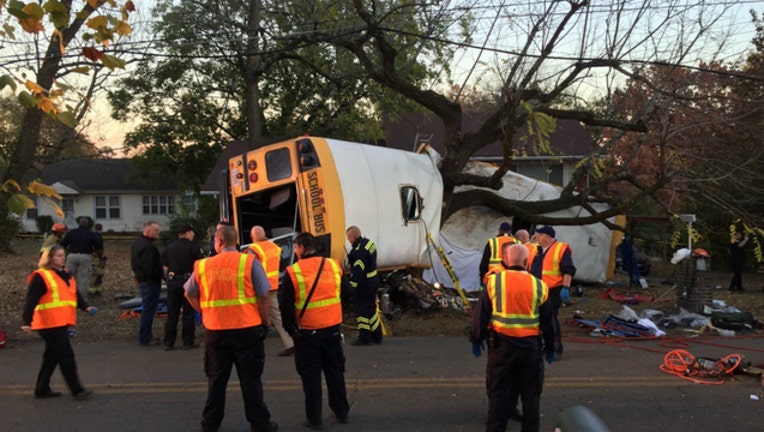 CHATTANOOGA, Tenn. (AP) - Students and administrators raised concerns about a Tennessee school bus driver's behavior behind the wheel in the weeks before a crash that killed six children.

Police have charged driver Johnthony Walker with vehicular homicide after the Chattanooga crash. Federal authorities said Walker was driving off the designated bus route when he wrecked on a curvy road while carrying 37 children on their way home from Woodmore Elementary School.

"The bus driver drives fast," one student wrote earlier this month. "It feels like the bus is going to flip over... When someone is in the aisle he stops the bus and he makes people hit their heads."

Another student wrote: "The bus driver was doing sharp turns and he made me fly over to the next seat. We need seat belts."

On Nov. 2, a school official boarded the bus after the driver complained that students were not listening to him. One student had complained about the heat on the bus and cursed about it to the bus driver.

The school district's transportation supervisor, Benjamin Coulter, responded that "we are addressing the issue with the driver."

National Transportation Safety Board Chairman Christopher A. Hart said in a news conference earlier this week that Walker had taken on a second job at an Amazon fulfillment center, and part of the agency's investigation will look at whether fatigue played a role in the wreck.

The bus driver had also complained to administrators that students would not listen to him when he told them not to stand in the bus or sit with their backs facing the front. The driver submitted 10 names of students he said were misbehaving. The transportation supervisor responded that the driver may have had some legitimate safety concerns but that the driver shouldn't report so many students.

"I don't want the driver to become discouraged, but he can't be turning 10 referrals in a day to you, either," Coulter wrote.

Woodmore Principal Brenda Adamson-Cothran asked for video of the bus leaving campus, noting that a few days earlier "the driver, in my opinion, was driving way too fast when he pulled out of our school."

It's unclear what the video showed; hyperlinks to it are redacted in the records.

On Nov. 16, Adamson-Cothran wrote to Coulter to tell him six students had reported that the driver "was swerving and purposely trying to cause them to fall today."

Walker was in custody at the Hamilton County Correctional Facility on Friday and had a court hearing scheduled for Tuesday. Jail records do not indicate whether he has an attorney.

The complaints about Walker appear to have begun in September when a parent wrote a letter to complain that the driver had cursed her kids and slammed on the brakes, causing them to hit their heads and fall out of their seats.

The parent wrote that if it happened again, she would take it upon herself "to beat his (expletive) my damn self."

In the days immediately after the crash, school officials repeatedly declined to comment on whether anyone had complained or how they responded. The correspondence about the driver was released after public records requests by The Associated Press and other media outlets.

Hamilton County schools spokeswoman Amy Katcher noted that Walker was employed by outside contractor Durham School Services, so the district may not have access to all the complaints about him.

The bus company has not responded to questions about its safety record or Walker's employment history. Durham CEO David A. Duke released a video this week statement expressing condolences to the families and pledging to work with investigators.

Coulter, the school district's transportation supervisor, said in a Nov. 2 email to Durham manager Domenic D'Amico that the Woodmore principal had to intervene several times when Walker was arguing with students.

"This may be a situation where he needs to be coached on how to deal with the students," Coulter wrote.