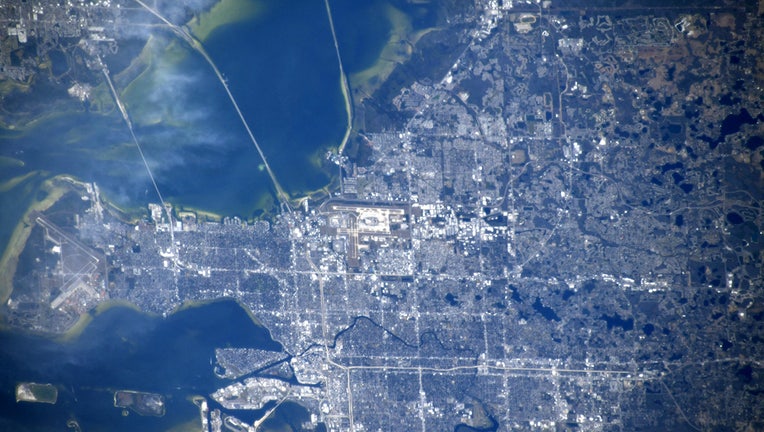 Soichi Noguchi shared this view of Tampa from the space station. North is to the right.

TAMPA, Fla. - Super Bowl LV in Tampa is going to have an out-of-this world flyover.

Sure, the Air Force is sending a rare trifecta of bombers over Raymond James Stadium as the national anthem concludes. But the International Space Station will also be soaring overhead later in the game.

NASA says the station will be appearing in the northwestern sky at 7:15 p.m., which is about 45 minutes after kickoff. The station will look like a bright star moving from northwest to south-southeast, reaching about 57 degrees in the sky – not quite two-thirds of the way up from the horizon.

The entire pass will last about seven minutes.

Three U.S. Air Force bombers flew over Raymond James Stadium Friday evening to practice for the Super Bowl flyover on Sunday. A second B-1B stood in for the B-2 expected for Sunday's real thing.

Of course, the timing is a ‘super’ coincidence, the result of orbital mechanics. The space station often passes over Florida as it circles the Earth once every 90 minutes.

The seven astronauts and cosmonauts aboard the station should be able to see the brightly lit stadium from space, especially with the help of the long lenses they often use for photography of terrestrial landmarks.

Japanese astronaut Soichi Noguchi offered a preview of the view when he tweeted a photo of Tampa from the station on Friday.

Back in 2016, astronaut Scott Kelly snapped a photo of Levi’s Stadium in San Francisco – as the Broncos beat the Panthers in Super Bowl 50 – during his year in space.