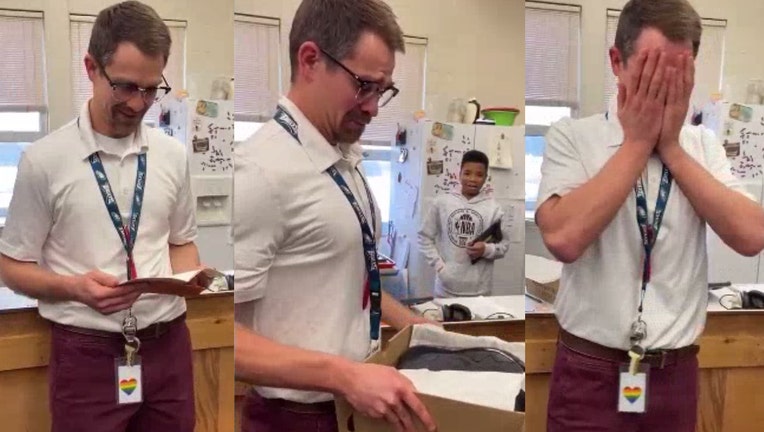 BELLEVUE, Neb. (FOX 5 DC) - A teacher in Nebraska was brought to tears when his students used their own money to buy him a new pair of sneakers after his were stolen.

Trey Payne is a beloved 8th grade teacher and basketball coach at Logan Fontenelle Middle School. Most recently, his favorite basketball shoes were stolen from his office.

Many of the students were upset when they heard the news and could not believe someone would do such a thing.

A mother of one of the students told FOX 5 her daughter and fellow peers were raising money to buy Mr. Payne a new pair of kicks and asked if she could also chip in. Turns out, after all the students pooled their money together they had more than enough.

An 8th grade teacher in Nebraska whose sneakers were stolen was moved to tears when his students surprised him with a new pair.

He begins to get teary-eyed as he reads the card, and as he opens the bag you can hear him say, "I hope this isn't shoes guys. Oh my, are you serious?"

When he opens the box containing the shoes his emotions overtake him. You can see Mr. Payne take off his glasses and begin to cry as the kids gather around him for a group hug.

"He would do anything for any of his students and turns out they would do the same for him," the mother told FOX 5.