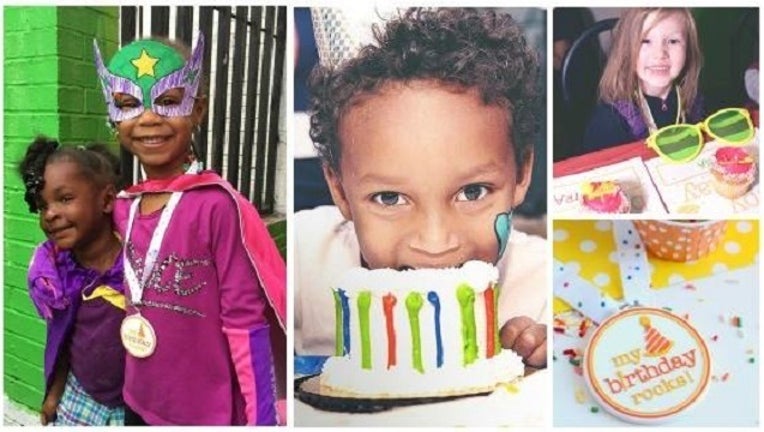 DALLAS (AP) — The little girl was fidgety all day, anticipating the very second her mom would pick her up from school.

The Dallas Morning News reports that for London, who was turning 5, it would be the first time she'd ever had one — and it would come with the help of The Birthday Party Project, an Addison-based agency offering celebrations for homeless kids around the country.

"The impact for a child who is unsheltered and uncelebrated is enormous," said Lara Gaither, the agency's partnerships director.

In 2012, founder Paige Chenault, an event planner, was pregnant and thinking about the party she was going to throw for her newborn child. Then, while reading a magazine story about homelessness, she started to wonder whether homeless kids were ever celebrated.

Chenault called Family Gateway and offered to throw a party for the shelter's kids. Since then, the Birthday Party Project has feted 3,000 birthdays in all, with about 20,000 kids in attendance at the parties.

London was decorating cookies, batting around balloons and opening donated gifts along with seven other kids marking December birthdays at Family Gateway.

For Robinson, who's been living at the shelter for several months along with her two daughters, recent years have been rough going. Money has been tight, and for London, birthday celebrations nonexistent.

"This is a day," Robinson said, "that I know she will remember."

As many as 100 people live in Family Gateway's 30 rooms on any given day, staying up to 120 days at a time while they work out plans with case directors to reach stability.

The families generally live on the edge, from recently divorced single moms to others escaping domestic violence situations and not yet ready to get back on their feet. Some families have undergone medical emergencies, lost jobs or been evicted from their homes.

"In most cases something pretty dramatic has happened, and they don't have anything left to fall back on," said Ellen Magnis, the shelter's executive director.

If homelessness is traumatic for adults, it's even more so for kids. By the time many families reach Family Gateway, they've been struggling for a while, Magnis said; first they try sleeping on friends' sofas, then in hotels, then maybe their vehicles.

"They're in a constant state of stress," she said. "Parents are trying to figure out what they're going to eat, how they're going to get to school. It's damaging to a child's psyche, because they have no stability."

Kids are resilient, but these children have fewer opportunities to enjoy what others do — including birthday parties. Like London, some kids served by The Birthday Party Project have never had a birthday party at all; they may not even know anything about blowing out candles or making a wish.

The Dec. 15 party at Family Gateway was the 61st since the Birthday Party Project started nearly five years ago.

Four volunteer party coordinators wearing signature orange shirts led a team of about a dozen additional volunteers, called "enthusiasts," as the group decorated the scene with balloons and set up tables for the night's activities.

Among the enthusiasts was Jodi Nelson, a North Dakota resident in Dallas on a business trip who first volunteered for the Birthday Party Project while living in Minneapolis.

"To see the kids enjoy the littlest things, that some kids take for granted ...," Nelson started. "When they open up their gifts they're not going to be, like, 'Oh, I didn't want that.' They come from nothing."

Finally, the room prepped for the festivities, it was time: The shelter kids romped into the room, slapping high-fives between two lines of volunteers.

Before long the scene was loud and chaotic, with kids playing bingo, frosting and decorating cookies, or wrapping themselves up in white streamers and plastic top hats to resemble snowmen.

"We like to make sure there's never a dull moment," said party coordinator Julie Johnston.

The eight birthday kids, ages 4 to 17, were draped with birthday badges. After 45 minutes of fun, they gathered around candle-lit cupcakes and the singing began.

Each kid's face lit up like a sunrise as the wrapped gifts were handed out.

London, wide-eyed and wearing a snowflake tiara, squirmed as she opened her presents: a book, a doll, a stuffed white horse. For her mother, the day couldn't have been any more special.

"The best thing for me," Robinson said, "is they gave my daughter's smile back."