A woman tackled a man who was running from Lake Jackson police on January 31.

LAKE JACKSON, Texas - A mom in Texas took matters into her own hands and tackled a man suspected of looking into her daughter's window as he tried to flee from officers.

The incident occurred on January 31, according to the Lake Jackson Police Department.

Police were called out to the 300 block of Redwood Street in reference to a report of a suspicious male in the area that had looked inside a window of a house, FOX 26 Houston reports.

RELATED: Man steals rings from one girlfriend to propose to another in Orlando, sheriff says

Phyllis Pena told KPRC that she called 911 as she returned home from the store to find a man peeking into the window of her daughter's bedroom. She said the 15-year-old was not in the room at the time.

Administrative Sgt. Roy Welch with the Lake Jackson Police Department said officers began checking the area and located a man matching the description given by the caller.

At some point, Welch said, the suspect took off running and ran back toward Pena, who was outside her house in the front yard.

Pena tackled the suspect, later identified as 19-year-old Zane Hawkins, and held him down until officers took him into custody. 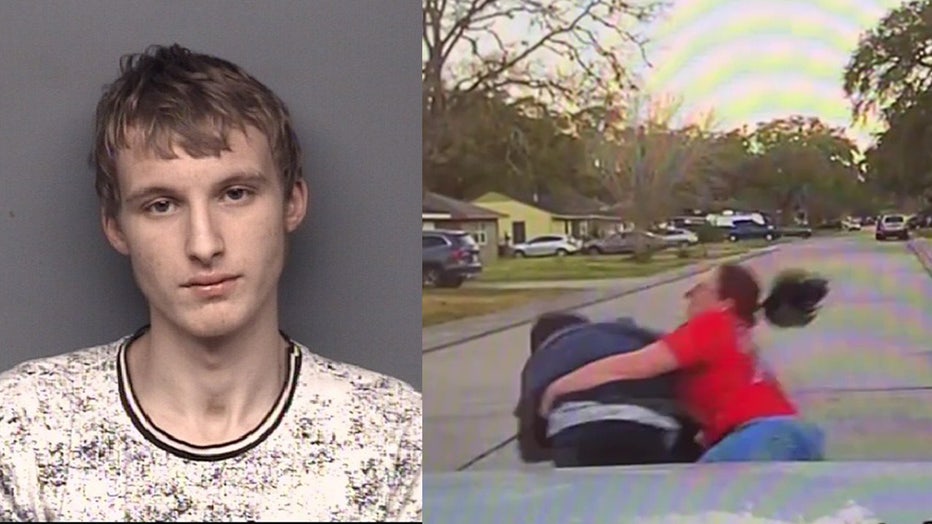 "The cop fist-bumped me and he was like, ‘Hey, so I heard the Texans are looking for a new linebacker,’" Pena told KPRC.

"It’s not very often that we have somebody that actually steps in, puts themself in harm’s way to assist in apprehending somebody," Welch said.

Hawkins was booked into the Lake Jackson Police Department Jail on charges of possession of a controlled substance, evading arrest, and resisting arrest. Welch said more charges could be added.

FOX 26 Houston and Storyful contributed to this report.