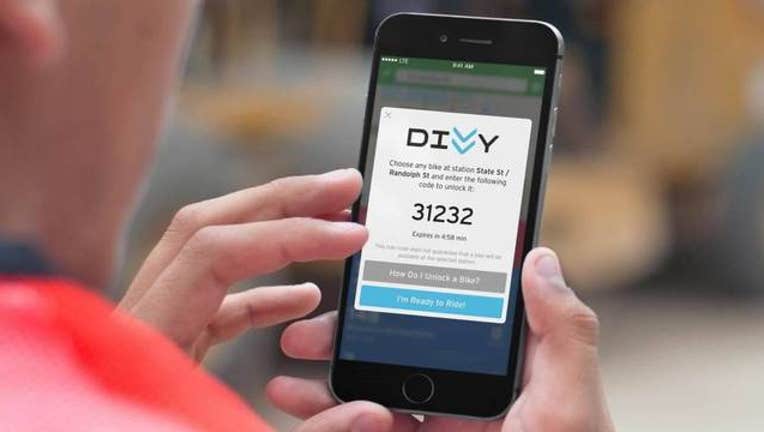 CHICAGO (Sun-Times Media Wire) - Want to hop on a Divvy bike without waiting in line or looking for your key? Now there’s an app for that.

Officials of the blue bike ride share system announced Friday a partnership with Transit App to “make it easier and faster to access Divvy bikes,” a statement from Divvy said.

The app allows riders to buy 24-hour Divvy passes from their iPhone or Android-based devices without waiting in lines at Divvy stations, even if they forget their Divvy key.

“We’re excited to be offering new technology options that make it possible to access our blue bikes from the palm of your hand,” Divvy GM Elliot Greenberger said in the statement. “We chose Transit App because they have tens of thousands of Chicago commuters who use their service to find the nearest and fastest way to get from Point A to Point B. This is a great match for Divvy.”

The app will allow “seamless access to Divvy’s fleet of 4,760 bikes,” Greenberger said.

Just four steps get your started, according to Divvy.

First, download and open Transit App. Then, tap the nearest Divvy station on the map and hit “Purchase Access Pass.” You then create an account and enter payment information; and finally, get an unlock code to release the bike from the station.

Once the app is downloaded and an account set up, “future Divvy rides will be even easier. Just tap on the nearest station and follow the prompts on the screen,” according to Divvy.

And it’s not just for new riders. Existing Divvy members who lose or forget their key can log in to their account through the app and request a ride code.

“Every month, millions of commuters trust Transit App to navigate their cities,” spokesman Jake Sion said in the statement. “We show them all their options in one place: they can watch their next bus approaching in real-time, find nearby bike share and car share stations, or check the ETA for the closest Uber. Now, by adding payment functionality, we’re enabling people to easily use innovative services like Divvy, and ultimately save them time and money in their daily commute.”

The bike share app was tested in Chattanooga, Tennessee; Columbus, Ohio; and Aspen, Colorado, according to Sion.

For full details, go to www.Divvybikes.com/app.