Chicago’s lakefront convention center will be prepared to accept its first COVID-19 patients next week if demand on the city’s hospitals requires a "relief valve."

CHICAGO - Chicago’s lakefront convention center will be prepared to accept its first COVID-19 patients next week if demand on the city’s hospitals requires a “relief valve,” the city’s mayor and officials leading the effort to convert McCormick Place into a temporary hospital said Friday.

Officials with the city and the Army Corps of Engineers said frenzied work is continuing to complete plans for a total of 3,000 patient beds. So far, workers have been able to complete spaces for 2,250 patients.

Also Friday, Chicago police said a second officer who tested positive died, but did not release any details about the officer.

Illinois Gov. J.B. Pritzker said the state was stepping up testing for the virus in minority communities. His comments come after an Associated Press analysis of U.S. data found that about 42% of the victims whose demographic information was publicly shared by officials were black. African Americans made up roughly 21% of the total population in the areas covered the analysis.

“No one life is more important than another,” the Democratic governor said at his daily news briefing. “Vulnerable and marginalized communities must receive equitable care.”

As for McCormick Place, state and city officials have said they hope the convention center will not be needed. It is designed to accept COVID-19 patients who don’t need the highest level of care that hospitals will focus on. Patients would be directly referred there from local hospitals. 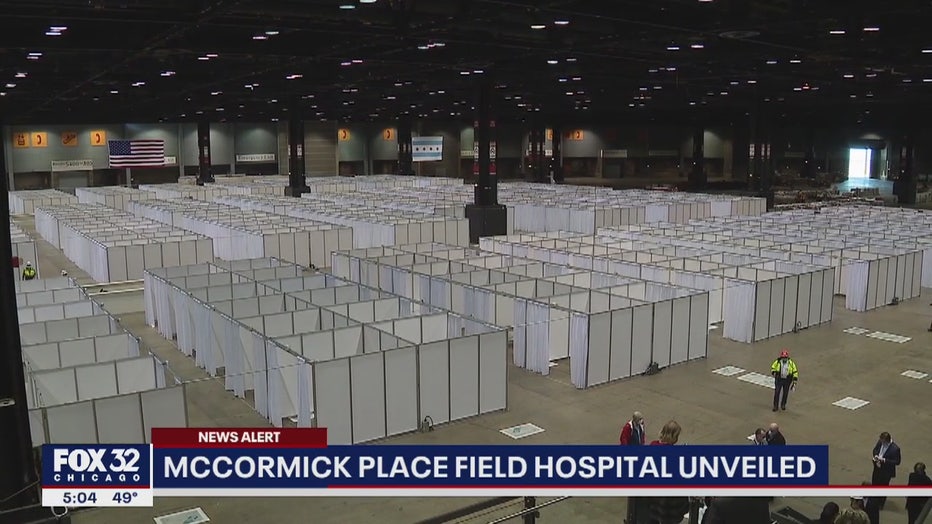 The effort includes the Army Corps of Engineers and the Illinois National Guard, along with public and private construction workers and tradespeople.

The patient spaces are divided by white curtains and laid out in a grid inside cavernous halls that typically host conventions and trade shows. Workers installed water lines, electrical lines and data lines to ensure health care workers could safely care for patients and access electronic medical records.

Dr. Nick Turkal, executive director of the facility, said more than 400 health care workers have been hired and training is underway.

“These people have chosen to leave their lives, put their lives on pause to come and take care of people in need,” he said. “They are brave, they are committed and they are excellent professionals.”

Earlier Friday, officials said a Chicago jail under court order to reduce the spread of the coronavirus saw the second death of an inmate who had tested positive for COVID-19.

The Cook County Jail detainee, identified as 51-year-old Leslie Pieroni, was pronounced dead Thursday night at St. Anthony Hospital, where he had been treated since April 3. An autopsy will be conducted to determine an official cause of death, but the Cook County sheriff’s department said preliminary indications are that he died of complications of COVID-19.

Pieroni was one of 276 detainees who have tested positive for the virus. His death came hours after a federal judge ordered Chicago’s Cook County Jail to take prompt action to stop the spread of the virus, including by making sure that the more than 4,000 detainees have access to adequate soap and sanitizer.

Pieroni had been in custody since December 2018, when he was arrested for allegedly sexually assaulting a child, according to the sheriff’s department. He was charged with predatory criminal sexual assault and aggravated criminal sexual abuse and a judge ordered him held without bond.

He previously had been convicted of a sexual offense and was charged in 2017 with failing to register as a sex offender.

The first inmate at the jail to die after testing positive for the coronavirus was 59-year-old Jeffery Pendleton, on Sunday.

Sheriff Tom Dart said the jail has already taken all but one of measures ordered by the judge, including supplying inmates with sanitizer three weeks ago.

Another judge in late March ordered bail reduction hearings to bring down the jail population by releasing detainees not considered a threat. The jail population has dropped by nearly 1,000 to under 4,500, sheriff’s department statistics indicate.