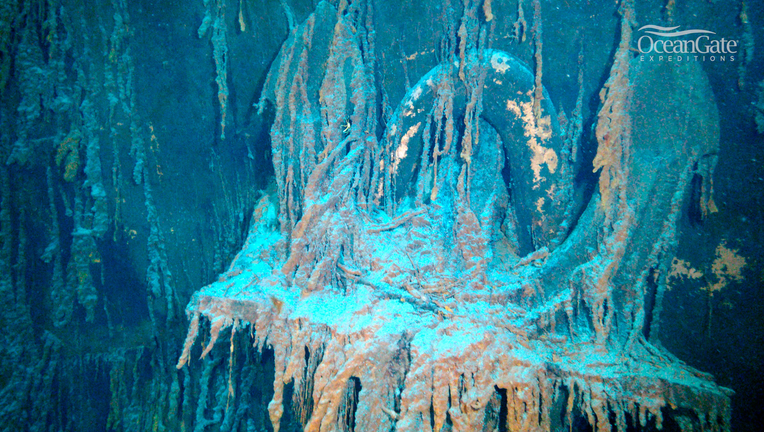 An up-close look at the remains of the Titanic. (Credit: OceanGate Expeditions)

It’s been more than 110 years since the Titanic left the world shocked when the behemoth cruise liner struck an iceberg and sank, killing more than 1,500 passengers and crew members amid the ship’s maiden voyage.

Now, newly-released, 8K, super high-definition video of her remains has surfaced thanks to the crew of the 2022 Titanic expedition.

The unprecedented footage highlights details and colors of the sunken ship which premiered on OceanGate Expeditions’ YouTube channel Tuesday. The images are so sharp that crewmembers said they can closely study parts that made up the ship such as the shackles and cranes that held the ship together.

For instance, crews spotted the manufacturer "Noah Hingley & Sons Ltd.," on the portside anchor— a detail never seen before in previous expeditions.

RELATED: How the Titanic was taken down by a mirage

Researchers also got an up-close look at Titanic’s renowned bow, hull number one, an enormous anchor chain (each link weighs approximately 200 pounds or nearly 91 kilograms), the number one cargo hold, and solid bronze capstans. They can also see dramatic evidence of decay where some of the ship’s rails collapsed and fell away from the ship as it hurled down to the ocean’s bottom.

What is 8K video?

According to PC Magazine, 8K is the next big jump in the television world. It’s a higher resolution than 4K with a resolution of 7,680 by 4,320 pixels. Some describe it as watching a video game.

FOX's Ashley Dvorkin joins NewsNOW from FOX's Pilar Arias to talk about the significance of a film like 'Titanic,' what the blockbuster did for the main actors and what's next for James Cameron.

"The amazing detail in the 8K footage will help our team of scientists and maritime archaeologists characterize the decay of the Titanic more precisely," said Stockton Rush, president of OceanGate Expeditions.

Researchers said they will be able to further determine the rate of decay of Titanic with footage from future expeditions that can be compared year after year. They could also identify species that are on and around the ship’s remains.

OceanGate Expeditions plans to launch another expedition in May 2023. Those looking to join are encouraged to reach out to the company.