Footage taken by Ryan Kyburz on Feb. 23 shows a fiery explosion and smoke billowing from the scene. Credit - Ryan Kyburz via Storyful

CAMERON, Texas - A massive explosion caused by a train crash in Texas early Tuesday morning was caught on video.

The train, which was carrying fuel, exploded after colliding with an 18-wheeler around 6:45 a.m. CT just outside of the city of Cameron, located about 75 miles northeast of Austin. The Burlington Northern Santa Fe (BNSF) train exploded as a result of the crash, FOX News reports.

The BNSF train was carrying mixed freight and derailed near Hoyte. The train was struck by a semi-truck, "which impacted a [train] car carrying gasoline," BNSF Railways Senior Director of External Communications Courtney Wallace told the outlet.

Out of a total of 110 train cars, 13 derailed, Wallace said, citing initial reports. Five of the train cars that were carrying gasoline were still on fire hours after the crash.

"There were no injuries to the crew or truck driver. Local first responders and BNSF personnel are onsite to respond to the incident," Wallace said. "Out of an abundance of caution, local authorities have established a half-mile radius evacuation zone near the site. The cause is under investigation." 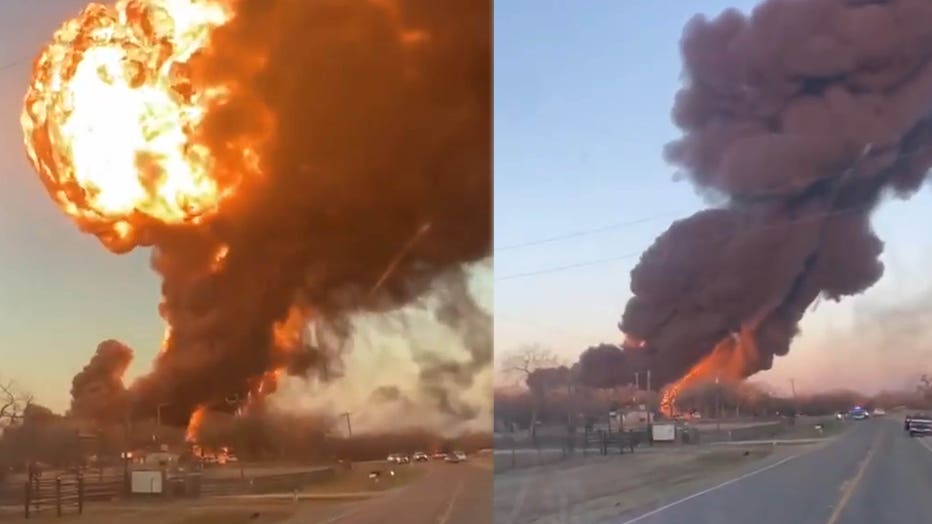 Smoke is seen billowing into the sky after a train collided with an 18-wheeler on Feb. 23, 2021 near Cameron, Texas. Credit: Ryan Kyburz via Storyful

Video taken by Ryan Kyburz just after 7 a.m. local time shows a fiery explosion and smoke billowing from the scene.

Milam County Sheriff Chris White said earlier Friday the fire was "primarily petroleum" and that there were no immediate reports of chemical hazards.