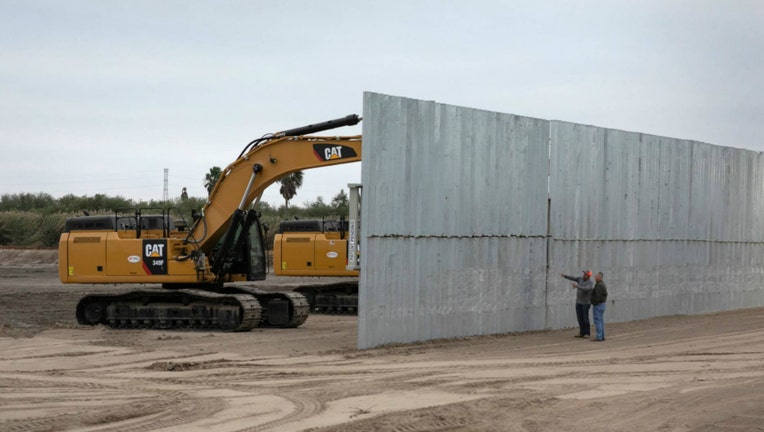 A construction crew works on a section of privately built border wall on December 11, 2019 near Mission, Texas. The hardline immigration group We Build The Wall is funding the construction of the wall on private land along a stretch of the Rio Grande

The Trump administration on Friday marked the 100th mile of wall construction along the southern border -- describing it as a “milestone achievement” and promising that there are many more miles to come by the end of the year.

“Today is a milestone that has been reached and a celebration is in order,” Acting Department of Homeland Security Secretary Chad Wolf said in front of wall in Yuma, Arizona. “Today I am proud to report that the Trump administration has constructed 100 miles of border wall system along the southern border.”

“This is a milestone achievement for the president, for the department and more importantly for our country -- including communities like Yuma,” he said.

The wall was a central campaign promise of President Trump’s 2016 bid, and he will be keen to show the electorate that he has delivered on that promise. The administration has pledged to build 450 miles by the end of 2020. Wolf told reporters that he was still confident that that promise would be fulfilled, even despite a series of congressional and legal hurdles the administration has been forced to overcome.

“The 100 miles we celebrate today are only the first of many more miles to come,” he said.

The administration has been plagued by battles for funding, both in Congress and in the courts. But it secured a major win this week when the 5th Circuit Court of Appeals removed an injunction that blocked the use of $3.6 billion in military funds.

“Entire wall is under construction or getting ready to start,” Trump tweeted Thursday.

The administration has also pushed back against critics, who note that the majority of the wall being built is replacing structures that were already in place. The administration has said that “new linear miles” takes longer to construct as it often requires the purchasing of private land.

Additionally, officials have said that there is no comparison between the old Vietnam-era landing mats and the new 30-foot structures -- complete with cameras, access roads, lights and other tech -- that have been put in place.

“I use this analogy: when someone builds a new modern smart five-bedroom house in place of a dilapidated run down shack, you do not call that a replacement house, you call that a new house,” he said.

The wall has long been a point of contention, with critics describing it as a vanity project of the president. Democrats in Congress have fiercely opposed funding going to the wall, with Rep. Raul Grijalva, D-Ariz., last month calling it a “monument to his racist policies along the Southern border.”

Sen. Martha McSally, R-Ariz., who accompanied Wolf to the wall site, said that once border walls were a bipartisan effort.

“Walls used to be bipartisan and they really do make a difference,” she said.

Wolf said the wall was top of border officials’ priority list and cited stats suggesting that the wall acted as a deterrent for illegal immigration, drug smuggling and human trafficking. He said that since border wall construction began in Tucson, Arizona, illegal crossings are down 24 percent. In San Diego, crossings are down 27 percent, and in Yuma crossings are down by over 78 percent.

"I’ve said it before and I’ll say it again: walls work and the facts do not lie,” he said.

That wall forms part of a series of strategies to solve the crisis at the border. Those include the Migrant Protection Protocols (MPP) that involves migrants being sent back to Mexico while their immigration hearings proceed, as well as a series of other international agreements and regulations with countries such as Guatemala, Honduras and El Salvador.

One of those agreements sees migrants sent to Guatemala to claim asylum there. Wolf told reporters that under that agreement roughly 96 migrants have been sent there so far, but only one migrant has chosen to remain in Guatemala and claim asylum.