Ginsburg died Friday of complications from metastatic pancreatic cancer at age 87. News of her passing broke shortly after Trump began to speak at a campaign rally in Minnesota, where he addressed the crowd for nearly two hours.

Trump gave the comments to reporters as he headed back to board Air Force One.

Trump later tweeted a statement on Ginsburg's death, saying in part, "Renowned for her brilliant mind and her powerful dissents at the Supreme Court, Justice Ginsburg demonstrated that one can disagree without being disagreeable toward one's colleagues or different points of view." 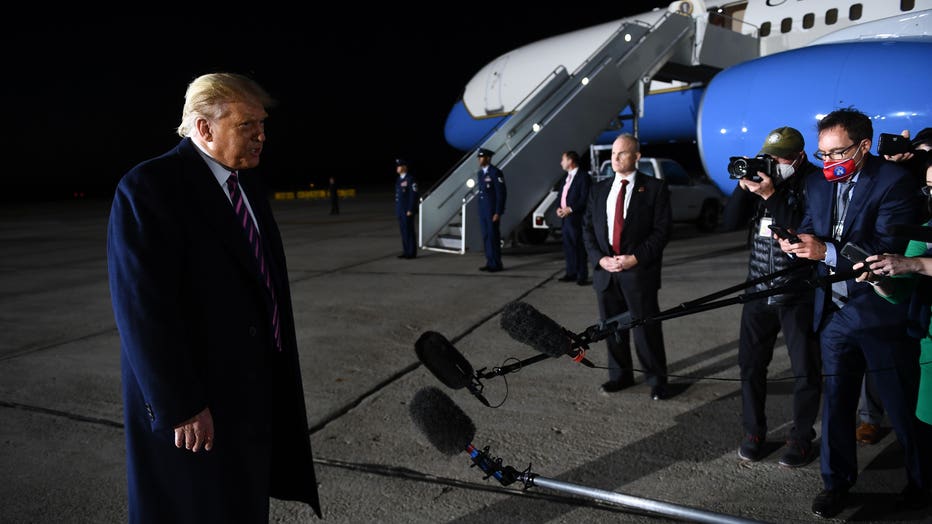 Ginsburg, who was nominated by President Bill Clinton in 1993, served as the key liberal vote on court. Her death just 45 days before the election will likely spark a battle in an already polarized political climate over her replacement.

Following the death of conservative Justice Antonin Scalia in 2016, Republican Senate Majority Leader Mitch McConnell declined to act on President Barack Obama's nomination of Judge Merrick Garland to fill the opening, and the remained vacant until after Trump's election.

On Friday, McConnell said the Senate will vote on whomever Trump nominates to fill Ginsburg’s seat.

Democratic presidential nominee Joe Biden said in a written statement that Ginsburg’s successor should be picked by the victor of the November election.

“The voters should pick a president, and that president should select a successor to Justice Ginsburg. This was the position that the Republican Senate took in 2016, when there were nearly nine months before the election. That is the position the United States Senate must take now, when the election is less than two months away,” the statement read in part.

Joe Biden speaks on the death of Ruth Bader Ginsburg

Democratic nominee Joe Biden, returning to Delaware from his own campaign stop in Minnesota, praised Ginsburg upon his arrival.

Biden also gave remarks remarks at New Castle Airport in Delaware after a campaign trip to Minnesota, saying Ginsburg was “not only a giant of the legal profession, but a beloved figure.”

“She practiced the highest American ideals as a justice,” Biden added. "Ruth Bader Ginsburg stood for all of us."

Ginsburg, who was the oldest sitting member on the court, was nominated by President Bill Clinton in 1993. She became known as a women’s rights champion and authored powerful dissents in cases involving abortion, voting rights and pay discrimination against women.

Her outspokenness, especially during the Obama administration, inspired her nickname, “Notorious R.B.G.,” which is a play on rapper Notorious B.I.G.