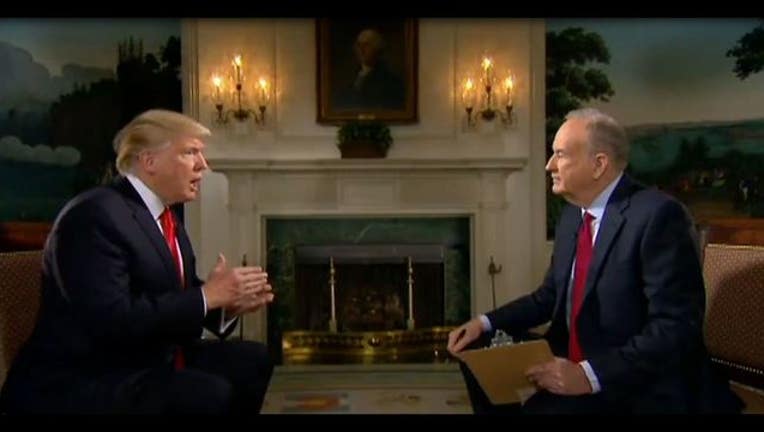 President Donald Trump has sat down for an interview with Fox News' Bill O'Reilly that will air before the Super Bowl on Sunday afternoon.

During the interview, O'Reilly pushed him on his support for Russian President Vladimir Putin and his insistence that "three million people" voted illegally in the last election.

O'REILLY says:  Do you respect Putin?

TRUMP says:  I do respect him.  I respect a lot of people. But that does not mean I am going to get a long with him.  He is the leader of his country.  I say it is better to get along with Russia then not.  if Russia helps in the fight against ISIS which is a major fight and Islamic terrorism all over the world that is a good thing. Will I get along with him? I don't know.

O'REILLY says:  Putin is a killer.

TRUMP says:  There are a lot of killers. What, do you think our country is so innocent?

O'REILLY says:  Is there any validity to the critics about you that you say things that you can't back up factually. And as the president you say there are three million illegal aliens who voted and then you don't have the data to back it up. Some people are going to say, 'It's irresponsible for the President to say that.'  Is there any validity to that?

TRUMP says:  Many people have come out and said I am right.

O"REILLY:  But you have to have data to back that?

TRUMP says:  When you see people who are illegals and they are on the registration rolls. Look Bill, we can be babies, but you take a look at the registration, you have illegals.  You have dead people. It's a bad situation.  It is really bad.