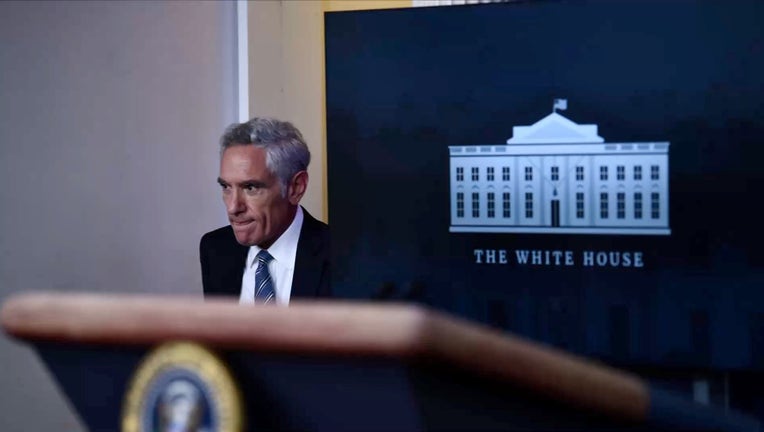 SAN FRANCISCO - President Donald Trump has found a new doctor for his coronavirus task force — and this time there's no daylight between them.

Trump last week announced that Dr. Scott Atlas, a frequent guest on Fox News Channel, has joined the White House as a pandemic adviser. Atlas, the former chief of neuroradiology at Stanford University Medical Center and a fellow at Stanford's conservative Hoover Institution, has no expertise in public health or infectious diseases.

But he has long been a critic of coronavirus lockdowns and has campaigned for kids to return to the classroom and for the return of college sports, just like Trump.

“Scott is a very famous man who’s also very highly respected," Trump told reporters as he introduced the addition. “He has many great ideas and he thinks what we’ve done is really good.”

Atlas' hiring comes amid ongoing tensions between the president and Drs. Anthony Fauci, the nation's top infectious diseases expert, and Deborah Birx, the task force's coordinator. While Birx remains closely involved in the administration's pandemic response, both she and Fauci have publicly contradicted the rosy picture the president has painted of a virus that has now killed more than 167,000 people in the United States and infected millions nationwide.

Atlas, the sole doctor to share the stage at Trump's pandemic briefings this past week, has long questioned polices that have been embraced by public health experts both in the U.S. and abroad. He has called it a “good thing” for younger, healthy people to be exposed to the virus, while falsely claiming children are at near “zero risk."

In an April op-ed in The Hill newspaper, Atlas bemoaned that lockdowns may have prevented the development of “natural herd immunity."

“In the absence of immunization, society needs circulation of the virus, assuming high-risk people can be isolated," he wrote.

In television appearances, Atlas has called on the nation to “get a grip" and argued that “there’s nothing wrong" with having low-risk people get infected, as long as the vulnerable are protected.

While younger people are certainly at far lower risk of developing serious complications from the virus, they can still spread it to others who may be more vulnerable, even when they have no symptoms. And while their chances of dying are slim, some do face severe complications, with one study finding that 35% of young adults had not returned to normal health two weeks to three weeks after testing positive.

But Atlas' thinking closely aligns with Trump's perspective on the virus, which he has played down since its earliest days. While Trump eventually supported the lockdowns that once helped slow the disease's spread, he has since pressured states to reopen schools and businesses as he tries to revive a battered economy before the November election.

Public health experts have long bemoaned Trump's efforts to politicize the virus and have encouraged him to let doctors and scientists lead the nation's response. But they questioned the decision to bring on Atlas, whose expertise is in magnetic resonance imaging and whose research has focused on factors impacting health care policy.

“I think he's utterly unqualified to help lead a COVID response," said Lawrence Gostin, a Georgetown University law professor who specializes in public health. “His medical degree isn’t even close to infectious diseases and public health and he has no experience in dealing with public health outbreaks.”

“Its very clear to me," Gostin added, "that the president brought on somebody who will just be a mouthpiece for his agenda and a ‘yes’ person." Gostin expressed concern that Trump was sidelining other doctors, including Birx and Fauci, because he had soured on their advice.

“In the face of an epidemic that’s killing hundreds of thousands of Americans, that’s unforgivable," he said. "You want clear independent advice from people with long experience in fighting novel pandemics and he has none of those credentials.”

Kavita Patel, a primary care physician and health policy expert who served in the Obama White House, said there’s little that can prepare a doctor for the crucible of a presidential staff, let alone working for the famously volatile Trump.

“I expect Dr. Atlas’ time will be marked with highs and lows and hopefully he will realize that the country really needs credible expertise and guidance, not partisan bias," said Patel. “By being partisan or political while having such an important (role), doctors undermine their credibility and ultimately dilute the role of science."

White House spokesman Judd Deere, in a statement, praised Atlas as “a world renowned physician and scholar” and dismissed questions about Atlas' qualifications.

“We are all in this fight together, and only the media would distort and diminish Dr. Atlas’ highly acclaimed career simply because he has come to serve the President,” he said.

Deere declined to say how long Atlas, who is now a paid special government employee, has been advising the president, and insisted his addition would not diminish the roles of Fauci and Birx.

Paul E. Peterson, director of the program on education policy and governance at Harvard University and a senior fellow at Hoover with Atlas, praised Atlas as “a really brilliant guy" with “a tremendous knowledge base” about the virus. Peterson said Atlas is someone who conducts ”the most rigorous and careful research before he comes to a conclusion."

Some colleagues have found Atlas abrasive. But Peterson, who has written several op-eds with Atlas advocating the reopening of schools and who appeared with Atlas at a White House event this past week, praised Atlas as “delightful to work with” and stressed the value of Trump having input from people with a variety of backgrounds.

“If you get a variety of people from one perspective or one kind of training out there, that’s not desirable," he said. "It’s extremely important to have diversity on the advisory board."