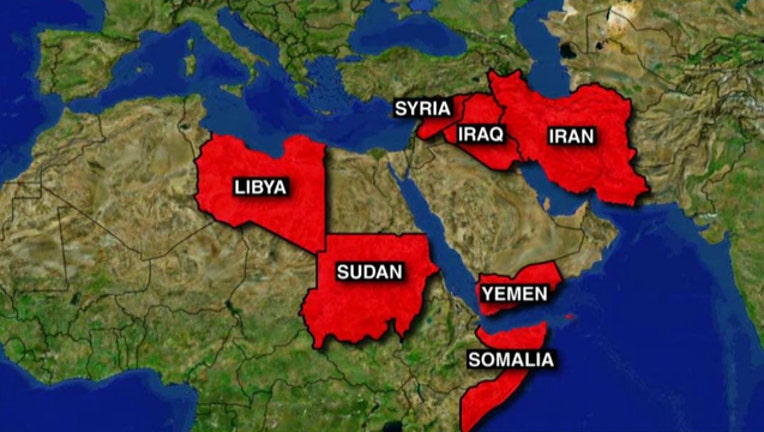 The immediate fallout from Trump's order meant that an untold number of foreign-born U.S. residents now traveling outside the U.S. could be stuck overseas for at least 90 days -- despite holding permanent residency "green cards" or other visas.  And some foreign nationals who were allowed to board flights before the order was signed Friday were being detained at U.S. airports, told they were no longer welcome.

Trump billed his sweeping executive order as a necessary step to stop "radical Islamic terrorists" from coming to the U.S. Included is a 90-day ban on travel to the U.S. by citizens of Iraq, Syria, Iran, Sudan, Libya, Somalia or Yemen and a 120-day suspension of the U.S. refugee program.

Trump's order singled out Syrians for the most aggressive ban, indefinitely blocking entry for anyone from that country, including those fleeing civil war.

The directive did not do anything to prevent attacks from homegrown extremists who were already in America, a primary concern of federal law enforcement officials. It also omitted Saudi Arabia, home to most of the Sept. 11 hijackers.

As a candidate Trump pledged to temporarily ban Muslims from coming to the U.S., then said he would implement "extreme vetting" for people from countries with significant terror concerns.

The order drew criticism from U.S. lawmakers and officials around the globe. In Iran, the foreign ministry suggested the country would limit issuing visas to American tourists in retaliation.

Canadian Prime Minister Justin Trudeau took to Twitter Saturday afternoon to say that refugees were welcome in Canada, "regardless of your faith."

Two of the first people blocked from entering the United States were Iraqis with links to the U.S. military.

Hameed Khalid Darweesh and Haider Sameer Abdulkhaleq Alshawi were detained by immigration officials after landing at New York's Kennedy airport Friday night. Darweesh had worked as an interpreter for the U.S. Army when it invaded Iraq in 2003. Later he worked as a contract engineer. He was allowed into the U.S. Saturday afternoon, hours after his attorney petitioned a federal court to let the two men go.

In their court filing, his lawyers said Alshawai's wife had worked for a U.S. security contractor in Iraq. Members of her family had been killed by insurgents because of their association with the U.S. military.

A federal law enforcement official said the government can exempt foreign nationals from the ban if their entry is deemed in the national interest. But it was not immediately clear how that exemption might be applied.

Diplomats from the seven countries singled out by Trump's order would still be allowed into the U.S.

Those already in the U.S. with a visa or green card would be allowed to stay, according to the official, who wasn't authorized to publicly discuss the details of how Trump's order was being put in place and spoke only on condition of anonymity.

Trump's order also directed U.S. officials to review information as needed to fully vet foreigners asking to come to the U.S. and draft a list of countries that don't provide that information. That left open the possibility that citizens of other countries could also face a travel ban.

The U.S. may still admit refugees on a case-by-case basis during the freeze, and the government would continue to process requests from people claiming religious persecution, "provided that the religion of the individual is a minority religion in the individual's country."

The Council on American-Islamic Relations said it would challenge the constitutionality of Trump's order.

"There is no evidence that refugees -- the most thoroughly vetted of all people entering our nation -- are a threat to national security," said Lena F. Masri, the group's national litigation director. "This is an order that is based on bigotry, not reality."

John Cohen, a former Department of Homeland Security counterterrorism official who worked under Democratic and Republican administrations, said the order didn't address America's "primary terrorism-related threat" -- people already in the U.S. who become inspired by what they see on the internet.

Trump's order drew support from some Republican lawmakers who have urged more security measures for the refugee vetting program, particularly for those from Syria.

"We are a compassionate nation and a country of immigrants. But as we know, terrorists are dead set on using our immigration and refugee programs as a Trojan Horse to attack us," House Homeland Security Committee Chairman Michael McCaul said in a statement. "With the stroke of a pen, he is doing more to shut down terrorist pathways into this country than the last administration did in eight years."

It is unclear how many people would be immediately impacted by the non-refugee travel ban. According to the statistics maintained by the Homeland Security Department, about 17,000 students from the seven designated countries were allowed into the U.S. for the 2015-2016 school year. In 2015 more than 86,000 people from those countries arrived in the U.S. on other, non-immigrant visas and more than 52,000 others became legal permanent residents.

Last year the U.S. resettled 85,000 people displaced by war, political oppression, hunger and religious prejudice, including more than 12,000 Syrians. Before leaving office President Barack Obama announced that the U.S. would accept 110,000 refugees in the coming year, but Trump's order cut that by more than half to 50,000.

No refugees were in the air when the travel ban was signed Friday, but about 350 people were in transit in Nairobi, Kenya, and were now stuck there, said Melanie Nezer, vice president of policy and advocacy for HIAS, a refugee resettlement aid agency. She said several hundred more people who were booked on U.S.-bound flights in the next week were now stranded around the globe.

"This in effect could be a permanent ban," she said. "Many of these people may never be able to come."