A reporter asked the president about what he thinks of QAnon, a convoluted, right-wing, pro-Trump conspiracy Theory, to which Trump replied that he appreciates that the movement supports him.

WASHINGTON - President Donald Trump on Wednesday said he appreciates support from the QAnon movement, which originated from a convoluted, baseless conspiracy theory that claims Trump is working in secret to defeat a cannibalistic, satanic child sex trafficking ring occurring within the “deep state.”

When asked by a reporter Wednesday during a White House press briefing what he thinks of the movement, Trump responded, “Well, I don’t know much about the movement other than I understand they like me very much, which I appreciate.”

“But I don’t know much about the movement,” Trump said. “I have heard that is is gaining in popularity, and from what I hear, these are people that, when they watch the streets of Portland, when they watch what happened in New York City in just the last six-to-seven months — but this was starting even four years ago when I came here, almost four years, can you believe it — these are people that don’t like seeing what’s going on in places like Portland and places like Chicago and New York and other cities and states.”

RELATED: Facebook bans some, but not all, QAnon groups, accounts

“And I’ve heard these are people that love our country and they just don’t like seeing it. So, I don’t know, really, anything about it other than they do supposedly like me and they also would like to see problems in these areas, like especially the areas that we’re talking about, go away. Because there’s no reason why the Democrats can’t run a city, and if they can’t, we will send in all of the federal — whether it’s troops or law enforcement — whatever they’d like, we’ll send them in, we’ll straighten out their problem in 24 hours or less,” Trump said.

The reporter asked Trump if he backed the crux of the QAnon conspiracy theory, that Trump is “secretly saving the world from this satanic cult of pedophiles and cannibals.” Trump replied, “Well I haven’t heard that but is that supposed to be a bad thing or a good thing?”

Last week, Trump dodged a question regarding the conspiracy theory when another reporter asked him about his congratulatory tweet to a QAnon-supporting congressional candidate, Marjorie Taylor Greene, who won her House primary runoff in Georgia. Greene has called the theory “something worth listening to and paying attention to" and called its unidentified source, known as Q, a “patriot.” Trump praised her as a “future Republican Star.” 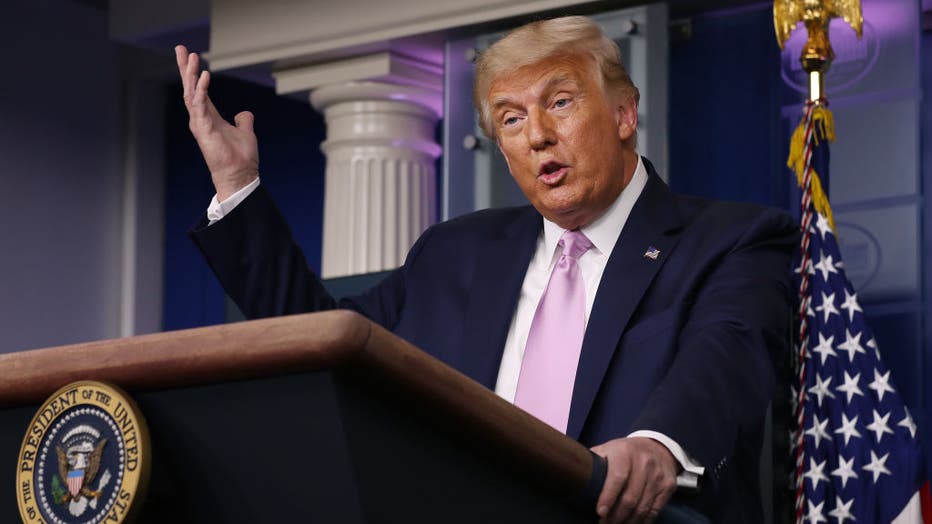 In addition to her embrace of QAnon, Greene has made a series of racist, anti-Semitic and Islamophobic comments, including alleging an “Islamic invasion” of government offices and accusing Jewish billionaire George Soros of collaborating with Nazis.

Those comments led the No. 2 House Republican, Rep. Steve Scalise of Louisiana, and others to back Greene’s opponent in hopes of denying her the party’s nomination. Since her win, however, critics have largely gone silent. Green still faces a Democrat in November, but the GOP primary was considered the real contest in a district Trump won handily in 2016.

“Well, she did very well in the election. She won by a lot. She was very popular and she comes from a great state and she had a tremendous victory. So absolutely, I did congratulate her,” Trump said, sidestepping the question and ignoring a follow-up before moving on to another reporter.

RELATED: Facebook beefs up anti-misinformation efforts ahead of US election

Trump has a history of advancing false conspiracies, including on Aug. 13, when he gave credence to a highly-criticized op-ed that questioned Democrat Kamala Harris’ eligibility to serve as vice president, even though she was born in Oakland, California.

QAnon has ricocheted around the darker corners of the internet since late 2017, but has been creeping into mainstream politics more and more. The baseless theory centers on an alleged anonymous, high-ranking government official known as “Q” who shares information about anti-Trump government officials, often allegedly tied to satanism and child sex trafficking.

Trump has retweeted QAnon-promoting accounts, and shirts and hats with QAnon symbols and slogans are not uncommon at his rallies.

On Wednesday, Facebook announced it will restrict the QAnon movement on its platform by banning groups and accounts associated with the movement as well as a variety of U.S.-based militia and anarchist groups that support violence.

The social media company also said it will continue to allow people to post material that supports these groups — so long as they do not otherwise violate policies against hate speech, abuse and other provocations.

Facebook said it is not banning QAnon outright because the group does not meet criteria necessary for the platform to designate it a "dangerous organization." But it is expanding this policy to address the movement because it has “demonstrated significant risks to public safety.”