President Trump on Monday openly questioned why “poorly run states” -- which he claimed are all “Democrat run” -- are seeking aid from the federal government amid the coronavirus crisis, seemingly piggy-backing off Senate Majority Leader Mitch McConnell’s suggestion that they instead file for bankruptcy.

“Why should the people and taxpayers of America be bailing out poorly run states (like Illinois, as example) and cities, in all cases Democrat run and managed, when most of the other states are not looking for bailout help?” Trump tweeted Monday. “I am open to discussing anything, but just asking?”

Chicago Mayor Lori Lightfoot responded to the tweet during a Monday afternoon news conference, calling the president's response to the pandemic "abysmal."

"Obviously the president's ability to judge how someone is performing and functioning is clearly off," Lightfoot said. "His meter is badly damaged because he thinks that he has done a good job in this crisis and nothing could be further from the truth."

Trump’s tweet did not mention McConnell's idea, but it comes after the Senate majority leader last week on “The Hugh Hewitt Show” said he would “certainly” be in favor of allowing states to use “the bankruptcy route” rather than sending governors more federal money to deal with their states’ deficits.

"I mean, we all represent states. We all have governors regardless of party who would love to have free money," McConnell said in response to a question on what the federal government should do to help states in tricky financial situations. "And that’s why I said yesterday we’re going to push the pause button here, because I think this whole business of additional assistance for state and local governments need[s] to be thoroughly evaluated.”

McConnell then mentioned that many states are struggling with funding pensions or similar programs, saying "[t]here's not going to be any desire on the Republican side to bail out state pensions by borrowing money from future generations.” 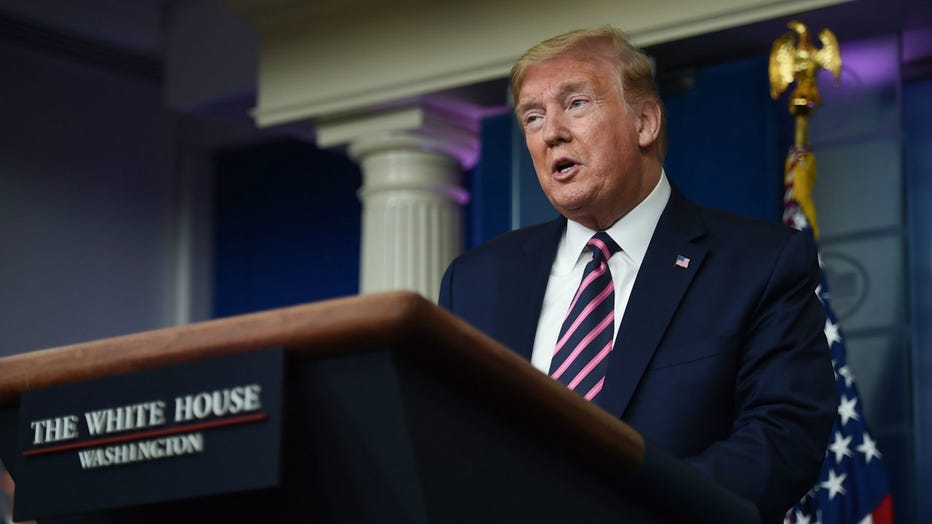 U.S. President Donald Trump speaks during the daily briefing on the novel coronavirus, which causes COVID-19, in the Brady Briefing Room of the White House on April 24, 2020, in Washington, D.C. (OLIVIER DOULIERY/AFP via Getty Images / Getty Images)

"Yeah, I would certainly be in favor of allowing states to use the bankruptcy route. It saves some cities," McConnell said. "And there’s no good reason for it not to be available.”

Democratic governors, like New York Gov. Andrew Cuomo and Michigan Gov. Gretchen Whitmer, slammed McConnell’s comments, as their states and others have requested aid from the federal government amid the pandemic—which has hit their states hard.

“One of the really dumb ideas of all time just came from Sen. Mitch McConnell. His suggestion to let states go bankrupt makes no sense. He says he doesn’t want a ‘Blue State Bailout.’ 15,000 people died — this is not the time for politics,” Cuomo said last week.

Cuomo said it was "vicious" for McConnell to suggest that "this is a blue state bailout.”

"What he is saying is, if you look at states with coronavirus problems they tend to be Democratic states," Cuomo said, noting New York, California, Michigan and Illinois. He added: "Don't help New York State because it is a Democratic state? How ugly a thought."

Over the weekend, Whitmer said McConnell’s suggestion was “incredibly dangerous.”

“It’s because of this global pandemic that we are all having to make tough decisions. We need the federal government to have our backs,” she said.

McConnell’s comments came after the Senate advanced an interim stimulus package to restock funds in the Paycheck Protection Program (PPP) and address a handful of other priorities.

He initially sought to have the bill include only funding for the PPP, but Democrats held up the legislation until they could extract concessions from the majority leader. Though McConnell ceded to some of their requests, he kept funding for state governments out of the bill, which Trump signed into law on Friday.