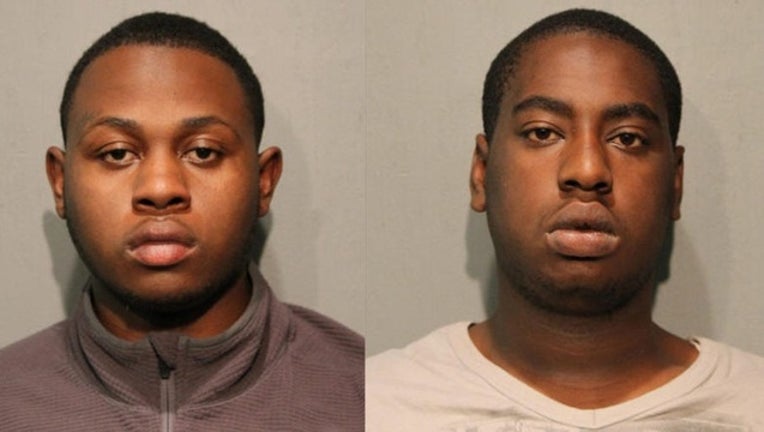 CHICAGO (STMW) - Two men face charges after they tried to rob an undercover Chicago Police officer at gunpoint Tuesday night in the Ashburn neighborhood on the Southwest Side, according to police.

Deon Tilman, 19; and Quinton Wiggins, 20, are each charged with attempted armed robbery with a firearm, aggravated assault of a peace officer with a weapon, and attempted vehicular hijacking with a firearm, according to Chicago Police.

Tilman pointed a gun at a Narcotics Division officer during an undercover drug operation in the 8000 block of South Homan about 7:15 p.m., authorities said.

The undercover officer had agreed to purchase heroin and cannabis from the men worth $429, Assistant Cook County State’s Attorney Lorraine Scaduto said during their bond hearing Wednesday.

Before the transaction was set to take place, Wiggins gave Tillman a gun, according to Scaduto.  Tilman went over to the officer’s parked covert vehicle, knocked and soon was announcing a robbery.

He was able to turn the officer’s car ignition off, Scaduto said.

Meanwhile, the officer was able to get out of the vehicle. Once out, the officer grabbed his weapon from his waistband and announced that he was a police officer, Scaduto said.

Tilman ran and then turned around and allegedly pointed the gun at the officer. The officer fired at Tilman, but he was not hit, police said.

The officer chased Tilman, who threw the 9 mm to the pavement, Scaduto said.

Tilman was able to get into a waiting vehicle and Wiggins drove away, Scaduto said. But the officer called for backup and the car was stopped at the mouth of the alley where it had been parked. Wiggins and Tillman were then arrested.

Tilman was on parole for a possession of a stolen motor vehicle case he was arrested for as a juvenile, Scaduto said.

Wiggins was on parole for a robbery.