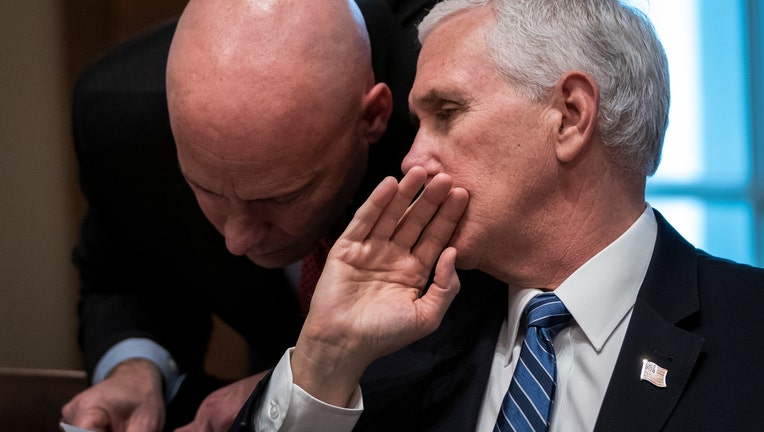 U.S. Vice President Mike Pence and his chief of staff Mark Short confer during a meeting with the White House Coronavirus Task Force and pharmaceutical executives in Cabinet Room of the White House on March 2, 2020 in Washington, DC. (Photo by Drew A

Vice President Mike Pence's office announced he would continue with his aggressive campaign schedule after his chief of staff, Marc Short, tested positive for the coronavirus Saturday - even though Pence is considered a "close contact" under Centers for Disease Control and Prevention guidelines.

Pence spokesman Devin O'Malley said Pence and his wife, Karen Pence, both tested negative for the virus on Saturday "and remain in good health."

President Donald Trump assured supporters packed shoulder to shoulder at a trio of rallies Saturday that "we're rounding the turn" on the coronavirus - despite spiking cases - and mocked challenger Joe Biden for raising alarms about the pandemic.

Meanwhile, Biden bemoaned to a smaller gathering the need to campaign at a distance but said he understood the public health reasons behind it.

With coronavirus infections reaching their highest peak of the pandemic just as the election headed into the home stretch, Trump and Biden took starkly different approaches to the public health crisis in appealing for votes in battleground states.

"We don't want to become superspreaders," Biden told supporters at a "drive-in" rally Saturday in Bucks County, Pennsylvania, picking up a term that has been used to describe the Rose Garden event in late September in which Trump announced his latest Supreme Court nominee.

More than two dozen people linked to the White House have contracted COVID-19 since that gathering, as have campaign aides.