A man's doorbell camera recorded the moment a tornado spun out of Hurricane Dorian ripped through Emerald Isle, North Carolina, and lifted the home off its foundation.

EMERALD ISLE, N.C. - A tornado spun by the outer bands of Hurricane Dorian badly damaged North Carolina’s Emerald Isle, lifting at least one home completely off of its foundation and leaving dozens of other mobile homes toppled in its wake.

A resident watched helplessly from his Ring camera as the force of the winds lifted his home off the foundation on Thursday morning, located at the badly hit Boardwalk RV Park on the isle, according to WRAL-TV.

Jason Sawyer and his wife spent the weekend preparing their Boardwalk RV property for Dorian and were at their home in Raeford, North Carolina, when the storm hit, according to the news station. The couple had purchased the Emerald Isle property in March.

"We spent about four days down there just visiting and enjoying the weekend and kind of tied things down on Sunday before we left," Sawyer told WRAL. "We weren't sure what we were going to come back to, but we sure didn't expect this."

The couple was looking at reports of damage to Emerald Isle on Facebook when Sawyer remembered to check his Ring doorbell camera, WRAL reported. 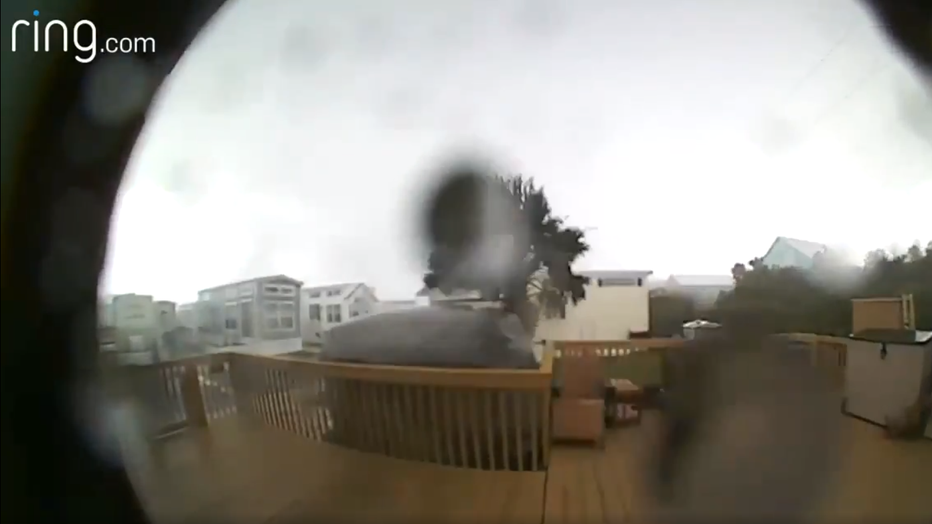 A North Carolina man’s Ring camera recorded the moment his home was ripped off its foundation when a tornado blew through his RV park on Sept. 5, 2019. (Photo credit: Provided / Jason Sawyer)

"I called my wife upstairs, and we kind of looked at it together, and there wasn't much to say," he told the news station.

"We knew it was bad. We didn't realize how bad, but, you know, catching that sound of the tornado hitting us was pretty humbling. It really shakes you to the core."

Sawyer told the news station that some neighbors nearby had sustained little to no damage.

However, video shot by Emerald Isle Town Manager Matt Zapp shows many other mobile homes in the Boardwalk RV Park wrecked and surrounded by debris.

Emerald Isle city officials posted images of the devastation on Twitter, adding that the Boardwalk RV Park suffered “the most severe damage.”

Several tornado warnings were issued Thursday by the National Weather Service throughout the Carolinas as Hurricane Dorian crawled along the coast. The storm battered towns with wind, rain and flooding, blowing ashore Friday as a Category 1 hurricane at Cape Hatteras — its first landfall on the U.S. mainland.