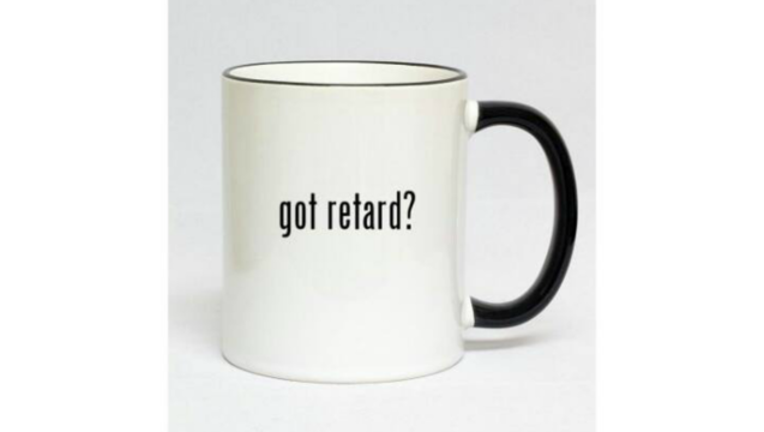 FOX NEWS - Walmart found itself on defense this week following the discovery of a mug with a controversial slogan for sale on the superstore’s website.

Company JM Holdings, a third-party vendor, was selling a mug with the words “got retard?” emblazoned on the side, the company confirmed to FoxNews.com. The item, which was also briefly available on Amazon.com, was promptly removed from Walmart’s website Monday morning-- but not before creating a stir on social media from concerned parents and special needs advocates.

A Walmart spokesman could not verify how long the item had been available for sale online but said the post "clearly violated our prohibited items policy and once it was brought to our attention, we quickly removed it from the Marketplace. We think it’s unacceptable a seller put it on the site in the first place."

When reached by FoxNews.com, an Amazon.com spokesman said the mug was "not listed for sale on Amazon" and would not elaborate on how the item ended up on the site. Other items, including apparel, with the phrase "got retard?" were available through Amazon's Marketplace early Tuesday but have since been removed from the site.

Sara Hart Weir, president of The National Down Syndrome Society, told Vocativ that both Walmart and Amazon agreed to remove the mugs after being contacted.