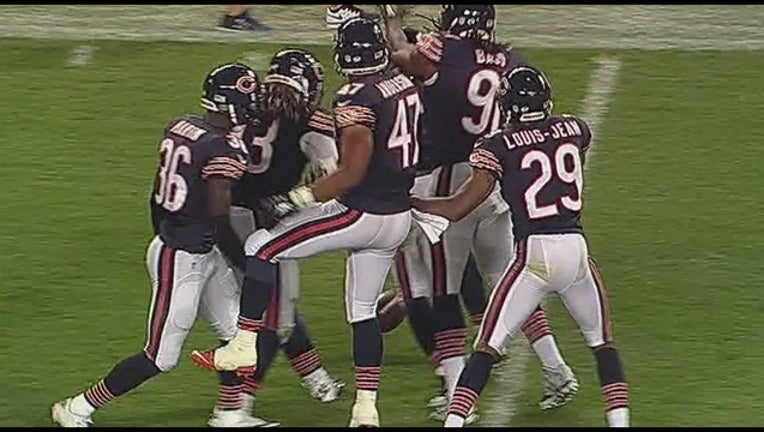 LAKE FOREST, Ill. (AP) — Construction helmets might seem more appropriate for the Chicago Bears after all the personnel transactions over the last three days.

The roster going into Sunday's home game against Oakland (2-1) will look far different than it did last week against Seattle.

Pass rush specialist Jared Allen has been traded and two other players are gone, too, with the team off to a 0-3 start.

"That's kind of like what it is right now — there's a lot of construction going on," tight end Martellus Bennett said.

After the Bears traded Allen to Carolina for a conditional draft pick, they dealt 2013 second-round pick Jonathan Bostic to New England for a draft pick and then cut safety Brock Vereen, a fourth-round draft pick in 2014.

All three had been acquired by former general manager Phil Emery, who was fired after last season, and the moves leave the Bears looking very much like a team in transition.

On a team with several key players without contracts for next year, such as running back Matt Forte and wide receiver Alshon Jeffery, the winless start and shakeup by management hasn't seemed to have distracted the players too much.

"We concern ourselves with the game plan and preparing for the team that we're playing that week, and all that other stuff — trade rumors, trade talk — that's for (media) to worry about," linebacker Lamarr Houston said.

Some players suggested the moves could have a positive effect.

"I think the organization is doing every single thing possible to make the team better," Bennett said. "I mean, there's a lot of hiccups right now, but that's what happens when there's a lot of change happening."

With Houston proving he can play linebacker after suffering a torn ACL last year, Willie Young apparently healed from a torn Achilles, and both Pernell McPhee and Sam Acho also at outside linebacker, the Bears had depth at Allen's position.

Defensive coordinator Vic Fangio said the trade means Acho will play more in the team's base 3-4 alignment, where Allen seemed to be out of place at times.

"He's had the most experience playing in this type of defense, so he has picked it up fast and is very comfortable in what we are doing and very knowledgeable," Fangio said. "He does a solid job when he is out there."

Bostic had a series of minor offseason and in-season injuries, and never got on the field with starters at inside linebacker with Shea McClellin and Christian Jones starting.

The lineup might have changed without those moves this week, anyway, because nose tackle Jeremiah Ratliff might return from a three-game suspension for violating of the NFL substance abuse policy. Quarterback Jay Cutler could return from a hamstring injury.

NOTES: Punter Pat O'Donnell suffered a right knee injury against Seattle and didn't practice Wednesday. It's possible the Bears would pick up another punter later in the week. ... Left tackle Jermon Bushrod suffered a concussion and shoulder injury against Seattle and did not practice Wednesday. ... Besides the suspension, Ratliff is recovering from an ankle injury.