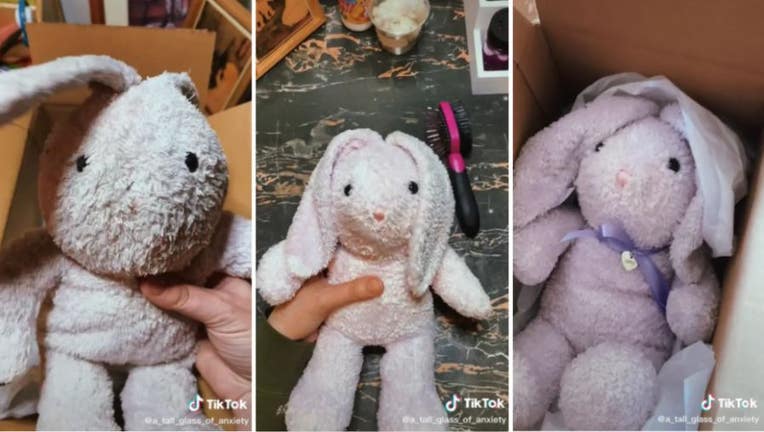 A woman in Nebraska found a stuffed bunny, and she’s made it her mission to reunite the plush with its rightful owner.

Erin Sorensen, a deputy editor and podcast host, first tweeted about her discovery on March 3.

"Hey Omaha people – Anyone’s family missing a bunny?" she wrote at the time. "Found near the intersection of 52nd and Burt, laying in the street. I picked it up because it looks like it was pretty loved by someone and I’m hopeful I can find that someone."

Sorensen let her 23,000 Twitter followers know that her dog discovered the bunny during their walk, so she’s not sure if the doll belonged to a human or dog who lives in the area.

She cross-posted her finding to TikTok and local neighborhood groups, but she hasn’t been able to locate the bunny’s owner yet. But her posts did catch the attention of Danielle Allore-Taylor, a Michigan-based plush doll restoration expert who owns and operates Fluff Stuffed Animal Restoration.

Allore-Taylor offered to restore the bunny after Sorensen tagged her in a post.

"The biggest thing I can say is that this was a labor of love," Allore-Taylor told Fox News Digital. "Erin and I both went out of our way to do something for someone, even though we don’t know who it is."

She added, "The world needs more kindness, and I’m glad that I could’ve been a part of it."

Allore-Taylor documented her process on TikTok, which involved laundering off layers of dirt, inserting new fluffy stuffing, brushing the fur and adding a new bow.

It turns out, the bunny was truly a light lavender color instead of the soft gray that appears in Sorenson’s original Twitter post.

Sorenson shared an update about the bunny’s appearance and her quest on March 13.

Fox News Digital reached out to Sorensen for comment.

The bunny is back with Sorensen in Omaha, according to a TikTok video she shared on Saturday, March 19.

"No the owner has not yet been found," she said in the video. "However, because of all the sharing and boosting you have done and the new stories we’ve been able to get, I have had more people reach out. And I’m even actually officially chasing down a couple of leads, which is very exciting."