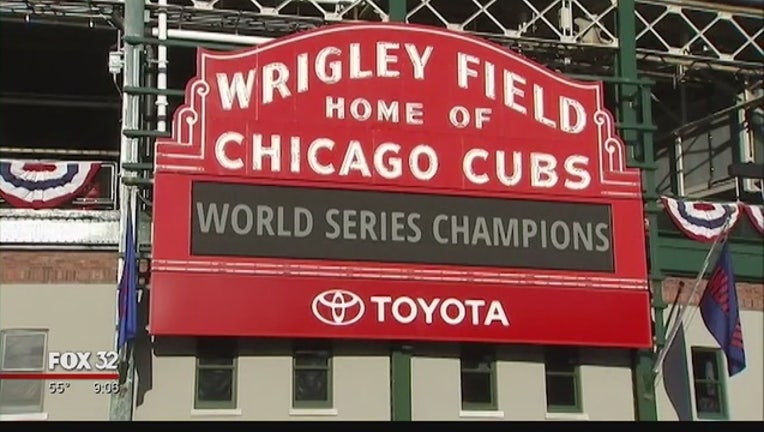 White House press secretary Josh Earnest said Wednesday that Obama is "really looking forward to it," as were a number of West Wing colleagues who are Cubs fans.

"I think anybody who's a sport fan, even if you're not a baseball fan and not a Cubs fan, appreciated the historic run that the Chicago Cubs had through the playoffs and to a World Series title this year," Earnest said.

The president invited the Cubs shortly after they beat the Cleveland Indians in an extra-inning, Game 7 thriller to end a title drought that dated to 1908. Obama has a home in Chicago and is a fan of the White Sox, but he rooted for the North Siders since his favorite team didn't make the playoffs.

Obama, a prominent sports fan, also hosted the Chicago Blackhawks after their three Stanley Cup championships since 2010, along with other championship teams from college and the U.S pro leagues.

"We're excited about it," Cubs chairman Tom Ricketts said. "It certainly is a plus that President Obama is a Chicagoan, although I hear he's a Sox fan."

Earnest said he was not aware of any unexpected challenges scheduling the visit so soon after the Cubs won the Series. He noted the visit comes earlier than normal. The Kansas City Royals won the World Series in November 2015, but didn't come to the White House until last July.

The Cubs' visit will come five days before Donald Trump is sworn in as president.

"Really looking forward to it," said Cubs manager Joe Maddon, who will be making his third White House visit.

Most members of the Cubs-owning Ricketts family are Republicans who support Trump, though during the primary, parents Joe and Marlene spent millions to stop the New York businessman. That led to Trump lashing out at the family and Tom Ricketts saying last February that he found it "surreal" to see Trump "threaten" his mother on social media over her reported political contributions to an anti-Trump PAC during the Republican primary.

That rift didn't stop Trump from announcing in November that Todd Ricketts was his pick as deputy commerce secretary. Pete Ricketts is the conservative governor of Nebraska, while Laura Ricketts is a top Democratic donor.

Asked if any family members had concerns or second thoughts about backing Trump in the general election, Tom Ricketts said: "We're excited to go on Monday. The whole team's gonna be there. It's gonna be a great day for all the players, for all the coaches, for everyone that can make it."

He said a couple of players might be unable to attend. Family spokesman Dennis Culloton also said Pete Ricketts won't be able to go, though Tom, Todd and Laura are scheduled to be there.

The team will be in Chicago this weekend for its annual fan convention.

Tom Ricketts said there was no thought given to waiting until a later date, even with his brother tabbed to be a part of the incoming administration.

"Once you get invited, you go," he said. "That's it. There's really no other way around it. I don't care where you live or who you vote for - whatever. It's an honor to just be involved."