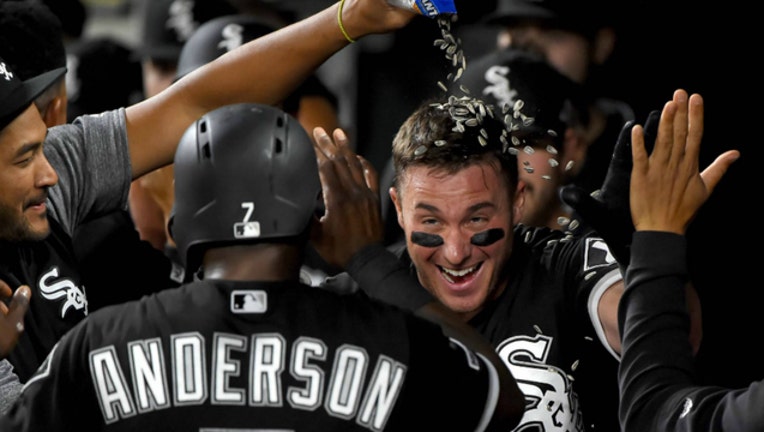 (Photo by Will Newton/Getty Images)

Abreu went 3 for 6 with a homer and five RBIs , James McCann also homered and the Chicago White Sox crushed the Orioles 12-2 Monday night.

McCann's three-run drive off David Hess (1-4) highlighted a four-run fifth inning, and Abreu's shot with a man on sparked a four-run seventh against Tanner Scott.

Abreu also had an RBI single in the fifth and singled in two runs during a four-run eighth. He added 22 points to his .192 batting average and increased his RBIs total to 17.

"He's working toward getting himself back in stride, just getting comfortable in the box again," manager Rick Renteria said. "He's been around a while. He's a professional. Even if he feels he's having lows, he has a way of working through them. He's a big contributor."

Abreu is a .295 career hitter who averaged 29 home runs over his first five big league seasons.

Abreu's fourth homer of the season, a drive to right field, upped the score to 6-0 in the seventh.

"That was a big opposite-field homer for us," McCann said. "That really slammed the door."

The rebuilding Orioles have lost four straight, fell to 1-10 at home and drew just 8,555 - their fifth time under 10,000 at Camden Yards this season.

Their youth was on full display in this defeat: Shortstop Richie Martin committed two errors; Renanto Núñez killed a potential uprising by getting picked off third base with the bases loaded; Pedro Severino had a passed ball during Chicago's pivotal fifth inning; and Miguel Castro threw three wild pitches in the eighth.

"We're going to make mistakes. There's no doubt about it," manager Brandon Hyde said. "We're really inexperienced and we haven't had a ton of big league success."

Catcher Jesús Sucre pitched the ninth for Baltimore, marking the third time in 24 games this season that Hyde has used a position player on the mound. Lobbing the ball in the 65 mph range, Sucre worked a 1-2-3 inning.

Hess retired 12 of his first 13 batters before he fell apart in the fifth, when he walked two and allowed four hits - a home run, two doubles and a single.

Making his first start since 2015 - his last season in the majors before this year - Chicago left-hander Manny Bañuelos gave up five hits and a walk over four shutout innings. He was followed by Ryan Burr and Jace Fry (1-0), who permitted one hit over 1 1/3 innings.

Baltimore's runs came on an RBI double by Trey Mancini in the fifth and solo homer by Severino in the ninth.

This was merely the latest in a series of lopsided defeats at Camden Yards for the Orioles. They lost 15-3 to Yankees, 13-2 and 10-3 to Oakland and 16-7 on Saturday to Minnesota.

The Orioles optioned struggling CF Cedric Mullins to Triple-A Norfolk and selected the contract of Stevie Wilkerson, who started in left field. Mullins was batting .094 in 22 games. "The main thing is confidence," Hyde said. "We thought the best thing for him was go down there in a different environment, a little bit less pressure ... and hopefully come back here soon." To make room for Wilkerson on the 40-man roster, the Orioles designated RHP Josh Lucas for assignment.

Chicago OF Eloy Jiménez was placed on the bereavement list and will miss the three-game series. Jiménez's grandmother died Sunday night, and the rookie returned to his native Dominican Republic. The team called up Nicky Delmonico, who started in left field.

White Sox: Starter Lucas Giolito (hamstring), placed on the 10-day IL on April 18, could be back with the club shortly after he's eligible to return, Renteria said.

Orioles: OF Dwight Smith Jr. said his strained right quad felt better than on Sunday, when he was forced from a game against Minnesota. Smith wasn't in the starting lineup but available to pinch hit. ... RHP Alex Cobb, who was hit hard Saturday in his return from the injured list (lumbar strain), opted for pitching a simulated game Monday instead of a bullpen session. "He wanted to face some hitters, make it more game-like," Hyde said.