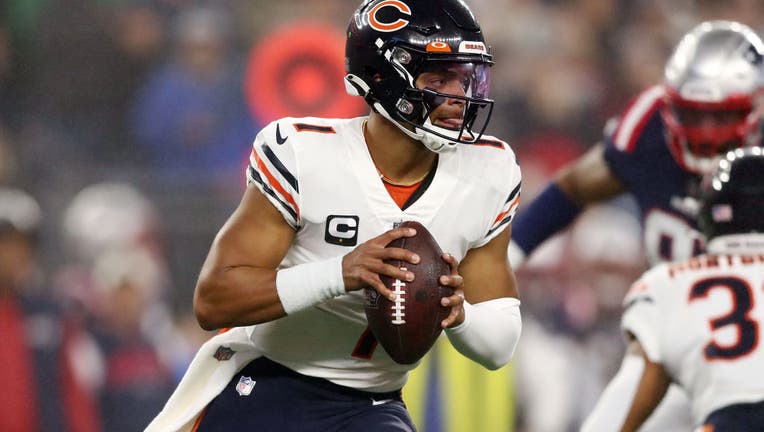 FOXBOROUGH, MASSACHUSETTS - OCTOBER 24: Justin Fields #1 of the Chicago Bears looks to pass during the first half against the New England Patriots at Gillette Stadium on October 24, 2022 in Foxborough, Massachusetts. (Photo by Adam Glanzman/Getty Ima

CHICAGO - Chicago Bears quarterback Justin Fields appears ready to start Sunday against the rival Green Bay Packers after missing a game because of an injury to his non-throwing shoulder.

Fields was a full participant in practice Friday for the second straight day and was listed without a designation on the team’s final injury report. He missed last week’s 31-10 loss at the New York Jets, but it looks as though he will play when the Bears host the Packers.

"If it keeps going the way it is the last two days, it’s a green light," coach Matt Eberflus said.

Fields, who has been impressing in his second season, separated his left shoulder and suffered some ligament damage in the AC joint when he was tackled on a designed run late in Chicago’s loss at Atlanta two weeks ago. He participated in practice on a limited basis leading up to the game at New York and was limited again on Wednesday.

"What it is, it’s just progress," Eberflus said. "Mobility and strength, you know, and then with the medical staff, they look at him. He’s gaining the mobility, strength. He feels more confident and it goes from limited to full. And that’s what happened. He feels good, had a good practice again today, so we’re excited about where he is."

It wasn’t all good news for Chicago’s quarterbacks, though. Eberflus said backup Trevor Siemian will have season-ending oblique surgery after he was injured in pregame warmups last week. The veteran wound up starting against the Jets after the Bears announced third-stringer Nathan Peterman would replace him in the lineup and was 14 of 25 for 179 yards with a touchdown and an interception.

The Bears (3-9) come into this week’s game with five straight losses. They’ve also dropped seven in a row against Green Bay (4-8).

Fields’ return figures to boost the offense after the Bears struggled to keep drives going last week. They averaged about 30 points the previous five games.

Fields leads all quarterbacks and ranks seventh overall with 834 yards rushing. He is averaging 6.8 yards per carry — second in the NFL. But he will be without one of his top weapons after leading receiver Darnell Mooney suffered a season-ending ankle injury last week.