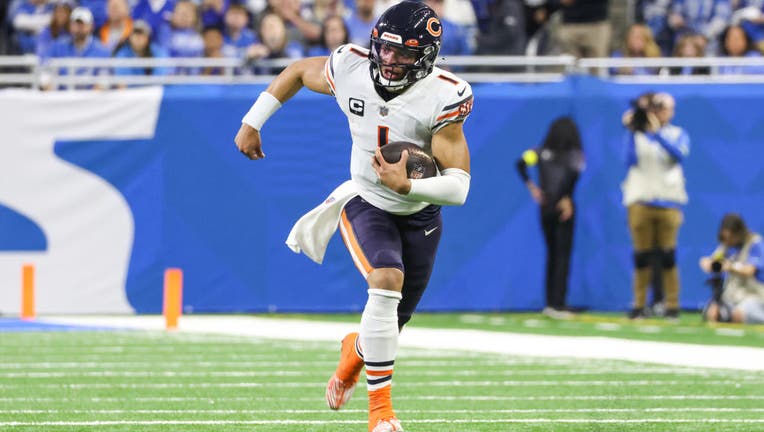 DETROIT, MI - JANUARY 01: Chicago Bears quarterback Justin Fields (1) runs with the ball during the first quarter of an NFL football game between the Chicago Bears and the Detroit Lions on January 1, 2023 at Ford Field in Detroit, Michigan. (Photo by

LAKE FOREST, Ill. - Justin Fields might not get the chance to break the single-season rushing record for an NFL quarterback.

Coach Matt Eberflus threw Fields’ status for the Chicago Bears’ season finale against Minnesota into question Monday, saying there are "ongoing conversations about everybody" with general manager Ryan Poles.

Fields needs 63 yards to break the QB rushing record of 1,206 set by Baltimore’s Lamar Jackson in 2019 during his MVP season. But it’s not clear he’ll get that opportunity when the Bears host the NFC North champion Vikings on Sunday.

"We’re working on that, on everybody, including Justin," Eberflus said. "We’re gonna visit with Ryan, the rest of the coaching staff. The health of the football team, the entire health of the team, where we were two weeks ago is different than where we are now, so I think it’s important that we evaluate that."

Fields has been one of the few bright spots for a rebuilding team in its first season under Poles and Eberflus. The Bears (3-13) set a franchise record by extending their skid to nine games and matched one with their 13th loss in a 41-10 blowout at Detroit on Sunday. The only team with a worse record than Chicago is Houston (2-13-1).

Eberflus seemed to play it a little more coy Monday after indicating following the game that Fields would suit up. He responded "yes" when asked if Fields — who sat out Week 12 with a separated nonthrowing shoulder — will play if he’s healthy. He added the Bears "potentially" will know who their starting quarterback is Wednesday, when they practice for the first time this week.

"I would just say the health of our football team is important," he said. "And that ties into everybody."

Fields ranked sixth in the NFL through Sunday with 1,143 yards rushing. He is averaging a league-leading 7.1 per attempt. The way he has been breaking off big runs, he could surpass Jackson without taking too many hits.

Eberflus said the record is "an important factor."

"But it’s not end-all, be-all," he added. "Certainly the health of our team is the most important thing."

Special teams. The Bears got a 63-yard kickoff return from Velus Jones Jr. and another solid performance from rookie punter Trenton Gill. He had seven punts for 321 yards, dropping three inside the 20.

The passing game. After showing some signs of growth as a passer, this felt like a step back for Fields. He was 7 of 21 for 75 yards and a 40.8 rating while getting sacked a season-high seven times. The Bears continue to rank last in the NFL in passing while leading the league in rushing. But after an early spurt, the ground game stalled, too. Though Fields ran for 132 yards, most came on Chicago’s first two possessions. Fields had a 31-yard run on the game-opening touchdown drive and scrambled 60 yards on the Bears’ next possession, setting up a field goal.

Jones Jr. The third-round pick from Tennessee had a big return for the second straight week when he ran a kickoff back from deep in the end zone 63 yards to the Detroit 45 on the second-to-last play of the first half. Fields then got intercepted by Aidan Hutchinson at the 35. Against Buffalo a week earlier, Jones returned four kickoffs for 113 yards, including a 40-yarder in the first quarter. He lost his punt return duties early in the season when he muffed two in a three-game span, contributing to losses against the New York Giants and the Washington Commanders.

WR Chase Claypool. Learning a new system in November is tough, and missing back-to-back games because of a knee injury before returning Sunday didn’t make things any easier. But the Bears expected more when they sent a second-round pick in the 2023 draft to Pittsburgh to get him. Claypool has just 111 yards on 12 catches and no touchdowns in six games for Chicago. Against Detroit, the only pass thrown his way went off his hands as he tried to make a lunging catch at the two-minute warning.

Eberflus said WR Dante Pettis flew home separately after being released from the hospital. He was cleared from the concussion protocol after getting shaken up in Sunday’s game and will continue to be monitored. Pettis experienced blurry vision, and Eberflus said that was the only symptom as far as he knew.

The Bears close out the season at home Sunday against Minnesota, a team that got stomped at Green Bay 41-17.