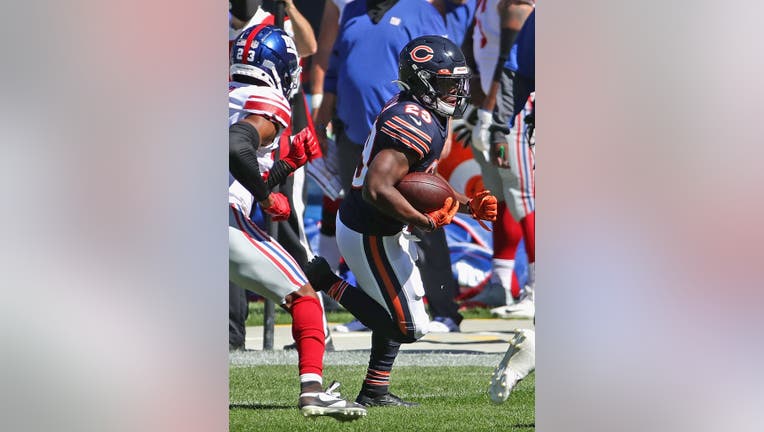 CHICAGO, ILLINOIS - SEPTEMBER 20: Tarik Cohen #29 of the Chicago Bears breaks around end for a run chased by Logan Ryan #23 of the New York Giants at Soldier Field on September 20, 2020 in Chicago, Illinois. (Photo by Jonathan Daniel/Getty Images)

CHICAGO - The Chicago Bears are apparently releasing versatile running back and return specialist Tarik Cohen, who he has been sidelined for nearly two years because of a knee injury.

Cohen all but confirmed the move Friday on Twitter, posting, "How do I file for unemployment?"

An All-Pro punt returner in 2018, Cohen hasn’t played since Week 3 of the 2020 season. He tore the ACL in his right knee in a win at Atlanta — eight days after he signed a three-year contract extension worth up to $18.25 million with about $9.5 million guaranteed — and has since been sidelined.

A fourth-round draft pick out of North Carolina A&T in 2017, Cohen ran for 1,101 yards and five touchdowns to go with 1,575 yards receiving and nine touchdown catches in 51 games.

The Bears opted for major changes after going 6-11 and missing the playoffs for the ninth time in 11 years. They fired general manager Ryan Pace and coach Matt Nagy, replacing them with GM Ryan Poles and coach Matt Eberflus.

Chicago made a major trade Thursday, sending star pass rusher Khalil Mack to the Los Angeles Chargers for two draft picks, two people familiar with the negotiations confirmed to The Associated Press. The people spoke on condition of anonymity because the trade can’t become official until the start of the new league year on Wednesday.