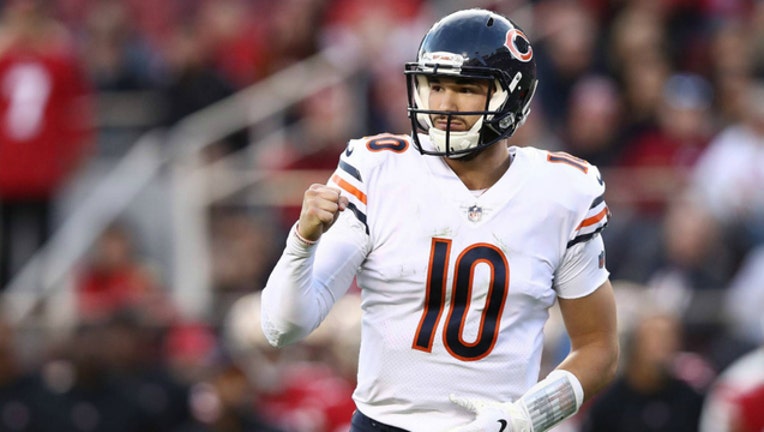 Mitchell Trubisky #10 of the Chicago Bears celebrates after a touchdown against the San Francisco 49ers during their NFL game at Levi's Stadium on December 23, 2018 in Santa Clara, California. (Photo by Ezra Shaw/Getty Images)

The then-defending Super Bowl champion Philadelphia Eagles had just grabbed a 16-15 lead in the final minute of the wild-card game at Soldier Field. Chicago's season ended with Cody Parkey's field-goal attempt ricocheting off the upright and crossbar.

But what stood out to Ragone - the Bears' quarterbacks coach - was what he saw from Trubisky on that final drive. The poise he displayed and decisions he made helped put Chicago in position to pull out the victory.

Trubisky comes into his third year in the NFL and second in coach Matt Nagy's system facing higher expectations after Chicago won the NFC North at 12-4.

The Bears believe their offense is poised to make a jump. That largely hinges on a prized quarterback coming off a solid season taking another step or two.

And to Ragone that drive against Philadelphia, when he completed two passes to help put Chicago in position to score, could be a starting point.

"The best part about that drive in my opinion, being with him and seeing through everything in two years, was the look in his eyes when Coach Nagy was calling plays as he walked off the sideline into the huddle," Ragone said.

"You just had that feeling that he was going to find a way to get us down there. Not saying I have not had that feeling before, but then you put everything together - the situation, the game, what this game meant, the crowd, everything else, who you're playing against, the defending Super Bowl champions, a lot of variables thrown in there.

"And it seemed like he just had a calmness about him. I looked at the backup quarterbacks at the time and I'm like, 'Man, we've got a great feeling here. The kid's gonna go do something.'"

The Bears envisioned big things from Trubisky when they traded up a spot with San Francisco to draft him with the No. 2 overall pick in 2017.

The expectations on him and the offense are higher this year after the defense led Chicago to the division title.

Trubisky took a big step last season, making the Pro Bowl as an alternate. He passed for 3,223 yards, about 1,000 more than his rookie season. His rating jumped from 77.5 to 95.4, and he went from throwing as many touchdowns as interceptions (seven) to finishing with 24 and 12.

Even so, there was room to grow. Trubisky was inconsistent, and the offense was middle-of-the-road statistically. The Bears ranked 21st overall, 21st in passing, 11th in rushing and ninth in scoring.

The question is how big a jump they can make in their second year under Nagy, particularly now that Trubisky has a season in the system. The Bears are seeing a difference in offseason workouts.

Trubisky is more comfortable and assertive.

"I'm able to help the new guys, the younger guys and even the guys that are coming back in this offense - how exactly we want it, how exactly Coach Nagy wants it," Trubisky said.

"Ultimately I'm the guy out there. ... I'm able to talk to guys in a way where I can teach it to them, they understand it and it just helps everyone get on the same play. When I know something I can explain it and make sure everyone's going toward the same goal and executing the same play."

Trubisky said the execution is sharper than it was a year ago. And the Bears are able to run plays they had to shelve.

"(Trubisky) really wants to dissect the defense," Robinson said. "That's the biggest thing. We want to make plays. (It's not about) just completions or running plays just to be running them. We're going to try to attack the defense and really beat the defense each and every play."

NOTES: Coach Matt Nagy said TE Trey Burton had sports hernia surgery about two months ago. The Bears hope to have him ready for the start of training camp. Burton missed the playoff loss to Philadelphia with a groin injury.