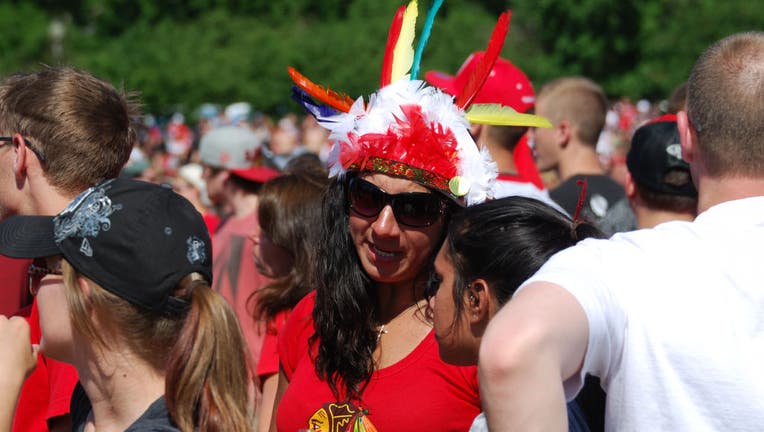 A woman wearing a feather headdress is among tens of thousands of fans who filled the streets of Chicago on June 28, 2013 to cheer on the Blackhawks for winning the Stanley Cup. (Photo credit: MIRA OBERMAN/AFP via Getty Images)

CHICAGO - The National Hockey League’s Chicago Blackhawks said Wednesday they are banning headdresses at home games as part of their pledge to honor the Native American community.

The move comes after conversations with Native American partners to establish new policies and initiatives. While the team will play the remainder of its games this season in an empty arena in Edmonton, Alberta, the no headdresses policy begins as soon as fans are allowed back at Chicago’s United Center for games or events.

“These symbols are sacred, traditionally reserved for leaders who have earned a place of great respect in their tribe, and should not be generalized or used as a costume or for everyday wear,” the team said.

The Blackhawks plan to further integrate Native American culture and storytelling into game presentation and community involvement. They’re also working to establish a new wing at Trickster Cultural Center, the only Native American-owned and operated arts institution in Illinois.

The team said earlier this month it will continue to use the Blackhawks name because it honors a Native American leader who has been an inspiration to generations. The moniker was chosen in 1926 for the World War I military Blackhawk Division, which was named after Sauk nation leader Black Hawk.

“The Chicago Blackhawks name and logo symbolizes an important and historic person, Black Hawk of Illinois’ Sac & Fox Nation, whose leadership and life has inspired generations of Native Americans, veterans and the public,” the NHL team said in a statement in early July. “We celebrate Black Hawk’s legacy by offering ongoing reverent examples of Native American culture, traditions and contributions, providing a platform for genuine dialogue with local and national Native American groups.”

“We recognize there is a fine line between respect and disrespect, and we commend other teams for their willingness to engage in that conversation,” the Blackhawks said. “Moving forward, we are committed to raising the bar even higher to expand awareness of Black Hawk and the important contributions of all Native American people.”