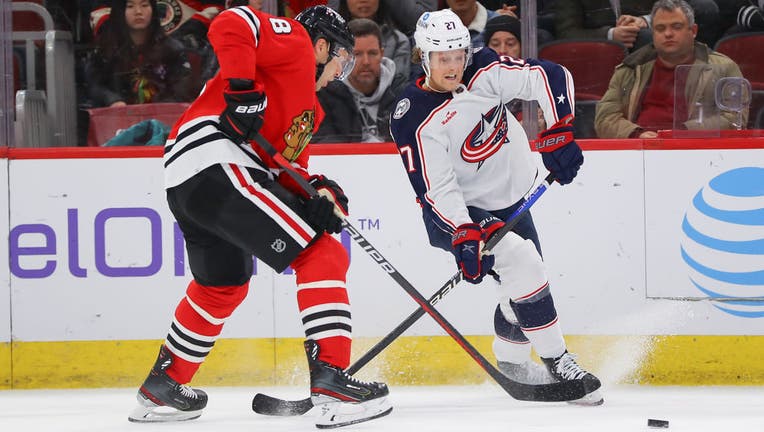 CHICAGO - Jonathan Toews and Patrick Kane each had a goal and two assists and the Chicago Blackhawks ended an eight-game skid with a 5-2 win over the Columbus Blue Jackets on Friday night.

Toews and Kane, the remaining pillars of Chicago's Stanley Cup teams from 2010, 2013 and 2015, played their 1,000th game together last Sunday. Both are in the final seasons of eight-year contracts and their future with the rebuilding Blackhawks is uncertain.

Toews assisted on Kane's opening goal of the game. Kane set up Toews' power-play score in the third.

Chicago is mired in last place, but its marquee stars savored this one.

"Given the situation of where our team is at and where the two of us are in our careers ... it's definitely on your mind a little bit more to enjoy every moment," Toews said. "So it's nice to make a couple of plays together like we did for old times sake and get us a win."

Alex Stalock made 27 saves in his return from a concussion to help last-place Chicago snap an 11-game home losing streak (0-10-1) and earn just its second win in 18 games overall (2-15-1). Max Domi, Andreas Athanasiou and Taylor Raddysh also scored as the Blackhawks won at the United Center for the first time since Nov. 3.

Stalock sustained a concussion early in a Nov. 1 game against the Islanders when New York forward Casey Cizikas plowed into with the 35-year-old journeyman goalie and sent him flying into the right post.

"A good first period by our group," Stalock said. "I got to get back into it and back up to speed. I thought we played a great game. We played fast."

Marcus Bjork had a goal and and assist and Kirill Marchenko scored on a power play as the Blue Jackets lost their sixth straight. Columbus has scored only nine times during its slide.

Blue Jackets rookie Daniil Tarasov allowed four goals on Chicago’s first 20 shots before being replaced by Joonas Korpisalo. Tarasov made his fifth straight start as slumping No. 1 goalie Elvis Merzlikins sat out with an undisclosed illness.

Kane ended an eight-game drought with his fifth goal as the Blackhawks opened the scoring in a game for first time since their last win, at the Rangers on Dec. 3.

"It's always nice to produce," Kane said. "Even after the last game you started feeling good that hopefully things are coming."

Chicago opened the scoring for only the sixth time this season when Kane snapped a wrister that sailed between Tarasov’s pads with 6:31 left in the first. Set up by Kane, a wide-open Domi made it 2-0 with a one-timer from the right circle 2 ½ minutes later.

Athanasiou and Raddysh scored on prime chances from the slot 53 seconds apart early in the second to put Chicago in charge 4-0 and prompt Columbus coach Brad Larsen to pull Tarasov.

After Bjork narrowed it to 4-2 early in the third, Chicago killed a 59-second Columbus 5-on-3 power play.

"We chased it until about the 10-minute mark of the second," Larsen said. "Then we started to play. But it’s too late."

Toews connected from the crease during a power play midway through the period to ice it.

Columbus D Adam Boqvist played after missing 24 games broken foot. … Korpisalo returned after sitting out six games with a lower-body injury and stopped 16 of 17 shots in relief. … Stalock got off to a solid start with the Blackhawks, going 3-2-1 with a 2.93 goals-against average before his concussion. Originally slated to be Chicago’s backup, he was pressed into additional action after Petr Mrazek suffered a groin injury in the fourth game of the season. … Cizikas was fined $5,000 by the NHL after colliding with Stalock.

Blackhawks: At Carolina on Tuesday.