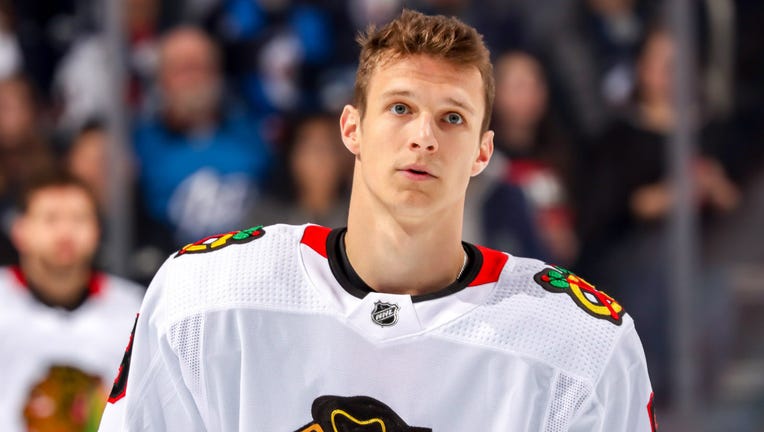 Dominik Kubalik of the Chicago Blackhawks looks on during the singing of the National anthems prior to puck drop against the Winnipeg Jets at the Bell MTS Place on February 16, 2020 in Winnipeg, Manitoba, Canada. (Darcy Finley/NHLI via Getty Images)

CHICAGO - Heading into his rookie season with the Chicago Blackhawks, Dominik Kubalik just focused on making the team.

Now his contract situation is one of the biggest questions for the Blackhawks.

Kubalik is eligible for restricted free agency after he led NHL rookies with 30 goals this season. He also had 16 assists in 68 games, making a smooth transition to Chicago after playing in Switzerland the previous season.

Negotiations between Kubalik’s representation and the Blackhawks could be tricky. The 6-foot-2 winger turned 25 last week, and his breakout performance in his only year in the league makes for an unusual case.

Plus, goaltender Corey Crawford, forwards Dylan Strome and Drake Caggiula, and defenseman Slater Koekkoek also are eligible for free agency, and the Blackhawks have salary-cap issues they have to work out.

Kubalik, a finalist for the Calder Trophy awarded to the NHL’s top rookie, said Thursday he hadn’t thought about free agency just yet.

“The season just ended, so I’m really happy to be home,” he said in a video conference call from his native Czech Republic. “It’s going to be probably a conversation with my agent in the next couple days and weeks.

“After this year, hopefully, I’m confident that I’m on a good way and I would love to stay in Chicago. So that’s probably all I can say about it right now.”

Chicago acquired Kubalik in a January 2019 trade with Los Angeles for a fifth-round pick. He was drafted by the Kings in the seventh round in 2013, but he never played for the team.

He made the Blackhawks out of training camp, making his NHL debut in Prague, and scored his first goal in his second game. But he really started to hit his stride toward the end of 2019, collecting 13 goals and six assists in a 15-game stretch from Dec. 19 to Jan. 19.

“When you start feeling more and more comfortable then you’re starting reaching your goals and then you still want more and more,” he said. “So I think that’s normal and obviously that’s what I want right now for next year. Obviously I want to get better. I need to get better, that’s for sure.”

Kubalik and the rest of Chicago’s young players got a closer look at what they need to do to improve when the Blackhawks made a surprising playoff appearance after the NHL season was suspended because of the coronavirus pandemic.

Kubalik had three goals and three assists as Chicago eliminated Edmonton in the qualifying round in four games. But he was held in check in the first round of the playoffs, finishing with just two points in a five-game loss against top-seeded Vegas.

“The hockey level was obviously higher than the regular season, and that’s great,” Kubalik said. “That’s where you can get more and more experiences and you can learn way quicker. So I’m really happy that we got a chance, an opportunity to be there.”