CHICAGO - Marc-Andre Fleury was traded from Vegas to Chicago on Tuesday, a stunning turn of events that has the NHL’s reigning Vezina Trophy-winning goaltender contemplating his future.

The Golden Knights traded Fleury to the Blackhawks for minor league forward Mikael Hakkarainen in a salary dump. Fleury is set to count $7 million against the cap next season, the final year of his contract.

And that’s if he reports at all. Agent Allan Walsh tweeted, "Marc-Andre will be taking time to discuss his situation with his family and seriously evaluate his hockey future at this time."

"With respect to what decisions he might make moving forward, this is a player who is at the very top of his game," McCrimmon said during a video call with reporters. "I sure think he’ll play this year. But those are thing that I would leave he or others to speak about."

Fleury, 36, did not have Chicago on his 10-team no-trade list but did not want to be traded at all. Chicago is certainly hoping to add him as the organization shifts from a rebuild into win-now mode.

"The opportunity to acquire a Vezina-winning goaltender is rare and one you cannot pass up," Blackhawks GM Stan Bowman said. "Marc-Andre improves our goaltending, strengthens our team defense and will have a huge impact on the overall development of the Blackhawks. Having a goaltender like this on our team will put the talent we currently have on our roster in a better position to achieve sustained success." 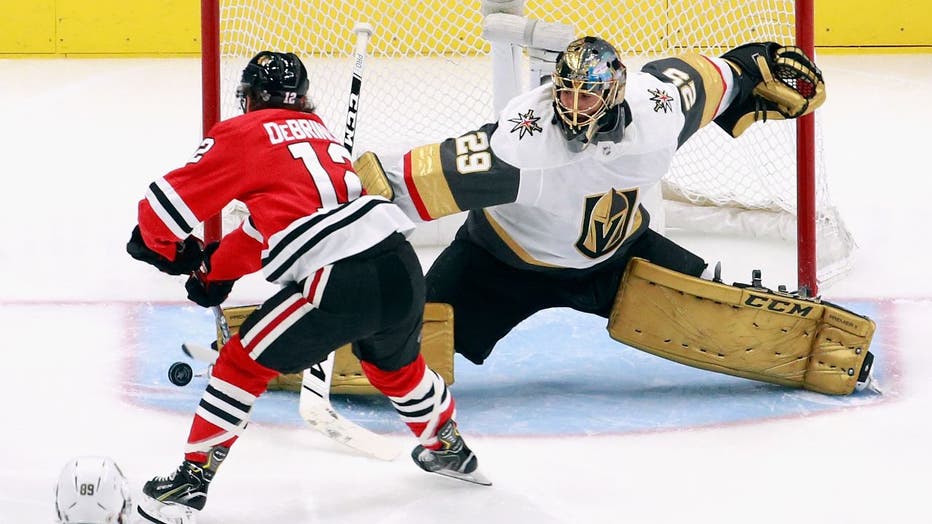 Marc-Andre Fleury of the Vegas Golden Knights makes the second period save on Alex DeBrincat of the Chicago Blackhawks in Game Three of the Western Conference First Round during the 2020 NHL Stanley Cup Playoffs at Rogers Place on August 15, 2020 in (Jeff Vinnick/Getty Images / Getty Images)

Fleury released a statement through Walsh thanking Golden Knights fans and teammates and saying he will miss playing in Vegas.

McCrimmon took issue with concerns raised over how Fleury found out about the trade on social media by saying he kept the goalie apprised of discussions in the month since Vegas’ season ended. He particularly made Fleury aware of the Blackhawks’ interest as early as July 12, with the two sides last speaking about trade possibilities Saturday.

Ultimately, McCrimmon felt it was necessary to free up Fleury’s salary to provide room to improve the roster while having a starting goalie already in place with Robin Lehner, who has four years left on his contract.

"I know for a lot of people this is a day that definitely is filled with sadness, and certainly I share all of those same emotions that you do," McCrimmon said, noting how Fleury had been the face of the franchise since Vegas’ inaugural season in 2018, and the ties the popular player had with team owner Bill Foley. "And yet I do feel I’m responsible to try to do everything I can to put the best team on the ice."

It’s the first time in 20 years the reigning Vezina winner was traded before the next season. Buffalo traded Dominik Hasek to Detroit on the first day of free agency in 2001.

Fleury went 26-10-0 with a 1.98 goals-against average and .928 save percentage last season and was voted the Vezina winner by GMs. He started 16 of the Golden Knights’ 19 playoff games over Lehner, who finished the postseason as the starter after a gaffe by Fleury late in Game 3 of the semifinals against Montreal altered the series and led coach Peter DeBoer to switch back and forth.

The 35-year-old Seabrook in March announced he is ending his 15-year career — but not retiring — because of a hip injury that led to him missing all of last season.

The Lightning freed up the three years left of Johnson’s salary — a $5 million annual salary-cap hit — and will be allowed to exceed the cap by $6.875 million each year with Seabrook on LTIR.

There were several other moves around the league, including the Washington Capitals getting captain Alex Ovechkin under contract for five more years, the St. Louis Blues agreeing to terms with winger Pavel Buchnevich and three players going on buyout waivers.

Ovechkin signed for $47.5 million, giving him five seasons to chase down Wayne Gretzky’s career goals record. There was no real doubt about Ovechkin returning — just the question of how much and for how long.

The Blues were confident they’d be able to get a deal done with Buchnevich after acquiring him from the New York Rangers last week for forward Sammy Blais and a 2022 second-round pick. It’s a $23.4 million, four-year deal that carries an annual cap hit of $5.8 million.

Vancouver put Braden Holtby and San Jose put Martin Jones on unconditional waivers for the purposes of buying out the remainder of the goalies’ contracts. Edmonton also began the buyout process with winger James Neal.

Holtby, the 2016 Vezina winner, struggled last season with the Canucks but is only three years removed from winning the Cup with Washington.

Jones backstopped the Sharks to the 2017 Cup Final but has had a sub-.900 save percentage each of the past three seasons and was signed for three more at a cap hit of $5.75 million.

"We knew change was needed," GM Doug Wilson said. "It’s never enjoyable to part with someone that, to me, has been such a big part of our franchise for the past six years."

In other goalie news, a person with direct knowledge of talks between the Buffalo Sabres and Linus Ullmark said negotiations are continuing with the hopes of reaching a deal by Wednesday. The person spoke to The Associated Press on condition of anonymity because the discussions are private.

Veteran defenseman Keith Yandle is signing a $900,000, one-year deal with the Philadelphia Flyers that includes a no-trade clause, according to another person with knowledge of the move who spoke to The AP on condition of anonymity because the contract cannot be signed until noon EDT Wednesday.

Columbus will also have prolific winger Patrik Laine under contract for next season after he decided to accept his $7.5 million qualifying offer as a restricted free agent, according to a third person with knowledge of the move who spoke on condition of anonymity because it cannot become official until Wednesday.