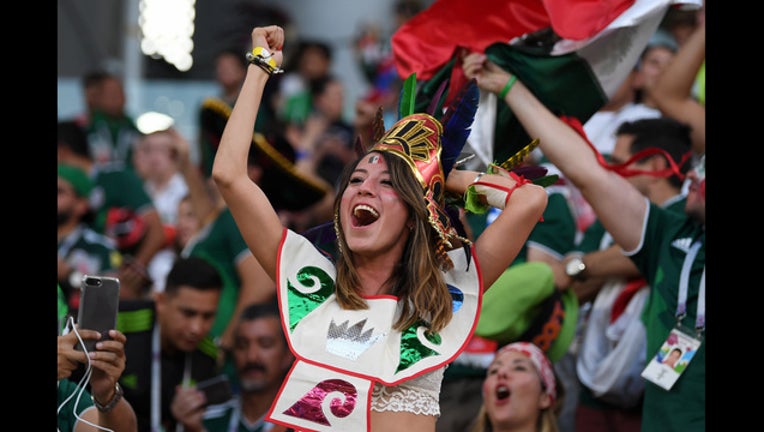 YEKATERINBURG, RUSSIA - JUNE 27: Mexico fans celebrate after hearing the news of a Korea Republic goal that will send Mexico in Round of 16 during the 2018 FIFA World Cup. (Photo by Matthias Hangst/Getty Images)

(WJBK) - It was an astonishing set of a matches played at the same time Wednesday that had teams from four countries all biting their nails.

The matchups: South Korea vs. Germany and Sweden vs. Mexico.

This sounds tricky but stay with me: South Koreans were already out of contention due to their other games, while defending 2014 FIFA World Cup champions Germany needed a win.

More than 90 minutes into the game it was 0-0. Meanwhile, down by two goals against Sweden, Mexican fans turned to the other match to learn their fate.

A 0-0 draw would be fine, but if Germany scored, Mexico would be eliminated. All they needed was one goal from South Korea to breathe easy.

And just like that Germany's eliminated from 2018 FIFA World Cup contention in the group stage for the first time since 1938.

The result: multiple types of celebrations. First, a parade for a Korea fan:

Then, another type of march. Upon first glance, you might think it's just a celebration, as Brazil fans march down the street, waving country flags and playing loud music.

But take a closer look and you'll notice they're carrying long, narrow boxes bearing Germany's colors in the same way pallbearers might escort a casket.

It's a move in response to Brazil’s 7-1 humiliation against Germany in the 2014 FIFA World Cup. It's a move that can only be summarized by one out-of-date piece of slang: Savage.