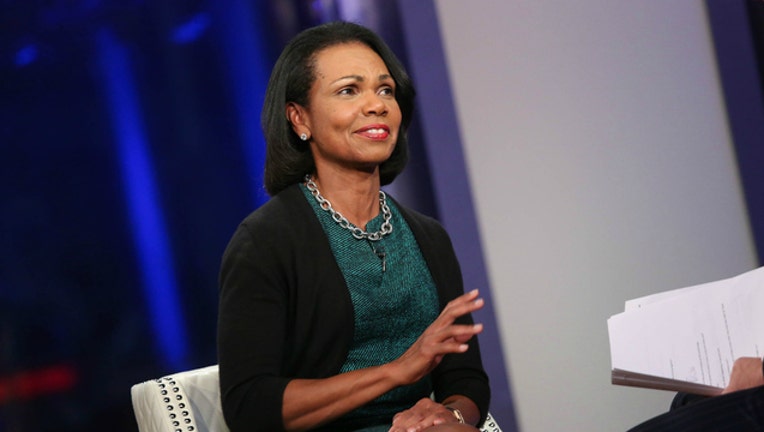 General manager John Dorsey, who opened the possibility of hiring a woman to be Cleveland's next coach, said Sunday that the team has not discussed former Secretary of State Condoleezza Rice as a candidate to become the club's ninth coach since 1999.

ESPN, citing an anonymous league source, reported that the team would like to interview Rice, an ardent Browns fan since childhood, for its coaching job.

However, Dorsey said she is not on the team's current list of candidates.

"Former Secretary of State Condoleezza Rice is a great leader, possesses the highest possible character and also happens to be a Browns fan," Dorsey said.

"I have the utmost respect and admiration for all she's accomplished and was honored to meet her for the first time earlier this season. Our coaching search will be thorough and deliberate, but we are still in the process of composing the list of candidates and Secretary Rice has not been discussed."

Earlier this week, Dorsey said he would consider a wide-range of candidates.

"I just want the best possible head coach to move this thing forward regardless of age," he said. "It could be a woman, too. I am serious. Who knows?"

The 64-year-old Rice would be an historic and outside-the-box candidate for the Browns, who fired Hue Jackson last month after he won just three games in two-plus seasons and went 0-16 in 2017.

There has never been a woman interviewed for a head coaching job in the NFL.

On her Facebook page, Rice professed her deep love for the Browns and said confidently, "I know they will hire an experienced coach to take us to the next level."

"On a more serious note, I do hope that the NFL will start to bring women into the coaching profession as position coaches and eventually coordinators and head coaches," she wrote. "One doesn't have to play the game to understand it and motivate players. But experience counts -- and it is time to develop a pool of experienced women coaches.

"BTW -- I'm not ready to coach but I would like to call a play or two next season if the Browns need ideas! And at no time will I call for a "prevent defense."

Rice's last reference is common among die-hard Browns fans, who still bemoan then-coach Marty Schottenheimer's decision to play soft coverage in the 1986 AFC championship game when Denver quarterback John Elway drove the Broncos 98 yards to a game-tying touchdown in the final seconds. "The Drive" as it's known helped the Broncos beat the Browns 23-20 in overtime, denying Cleveland a trip to the Super Bowl.

Rice discussed her love for the team during a visit to the Browns' headquarters in 2010. Her passion for the Browns dates to her early years in Alabama, where she and her father watched games together and cheered for Hall of Fame running back Jim Brown on teams coached by Paul Brown.

Rice has become increasingly involved in sports, serving on the College Football Playoff selection committee and chairing a commission on college basketball.

She served as secretary of state under President George W. Bush from 2005-09.

Dorsey said interim coach Gregg Williams will be interviewed for the full-time position following the season.

The Browns have a bye this week and will face Cincinnati next Sunday, when they'll have a reunion sorts with Jackson, who was hired by the Bengals as a special assistant to coach Marvin Lewis.