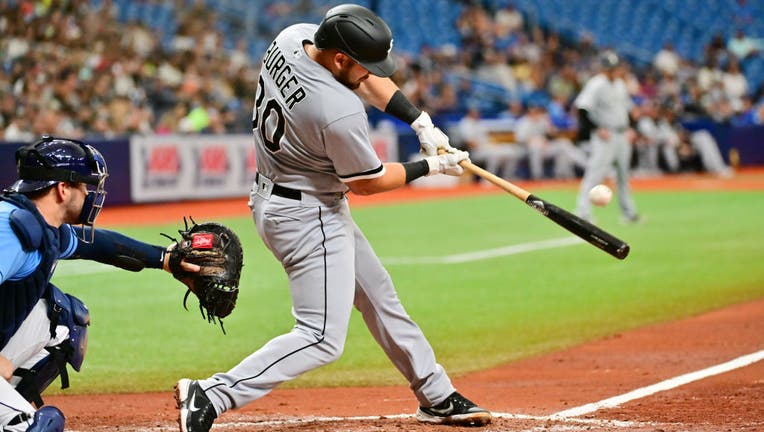 ST. PETERSBURG, Fla. - Jake Burger had a key hit for the second consecutive day and the Chicago White Sox hung on to a large early lead to beat the Tampa Bay Rays 6-5 on Sunday.

Burger, who had a go-ahead, two-run pinch-hit homer in the eighth inning of the White Sox’s 3-2 win on Saturday, had a two-run double during Chicago’s four-run first off Ryan Yarbrough (0-2).

Yasmani Grandal drove in two more on a check-swing opposite-field single to right in the first, and then Andrew Vaughn had an RBI double and Luis Robert added a run-scoring single in the second to make it 6-0.

But the Rays didn’t go away, starting with Isaac Paredes hitting a solo homer in the fifth before a four-run sixth pulled Tampa Bay within 6-5.

Yandy Díaz opened the sixth with a single and Ji-Man Choi reached when Grandal was charged with an error for mishandling a throw from shortstop Danny Mendick. Then Harold Ramirez hit a sacrifice fly and Randy Arozarena had an RBI triple before Mike Zunino connected on a two-out, two-run homer.

White Sox starter Lucas Giolito (4-2) gave up five runs, two earned, and eight hits over six innings. Liam Hendriks, the third Chicago reliever, worked the ninth to get his 16th save in 19 chances.

Three of Tampa Bay’s four runs in the sixth were unearned. The Rays dropped a season-high eight games behind the AL East-leading New York Yankees.

Chicago, which won for the fourth time in 11 games, got seven hits in 3 2/3 innings off reliever Ralph Garza Jr., who entered in fourth.

White Sox: RHP Lance Lynn (right knee) is scheduled to make his third rehab start Wednesday with Triple-A Charlotte. It is possible he could rejoin the White Sox after the outing.

Rays: Reliever Andrew Kittredge (back tightness) was reinstated from the 15-day IL.