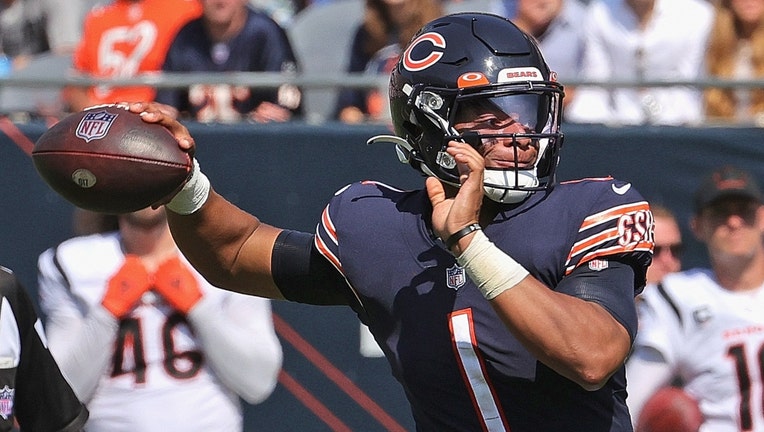 Justin Fields of the Chicago Bears passes against the Cincinnati Bengals at Soldier Field on September 19, 2021 in Chicago, Illinois. The Bears defeated the Bengals 20-17. (Jonathan Daniel/Getty Images / Getty Images)

LAKE FOREST, Ill. - From his work ethic to understanding a new offense, quarterback Justin Fields has convinced his new coaches with the Chicago Bears that he is making progress.

The real question facing the Bears is whether they have made enough progress supporting Fields.

The Bears didn’t draft a receiver in Round 2 when they had their first two picks, and didn’t sign any of the top free agent receivers to help Fields. Nor did they add a top-level guard or tackle to bolster an offensive line that struggled protecting Fields.

Center Lucas Patrick from the Green Bay Packers was their key offensive line addition. Patrick says the support for Fields will be there from players, but a big part will be help from the new offense being installed by Bears offensive coordinator Luke Getsy, Aaron Rodgers’ former quarterbacks coach in Green Bay.

"Every time I’ve seen him work with players I’ve seen the progress," Patrick said of Getsy. "In the wide receiver room he started with in Green Bay, I mean, (they had) a bunch of studs that he made better. He went into that QB room and I’m pretty sure that guy won an MVP."

"That guy," was Rodgers.

"Now he’s coming to be our OC," Patrick said. "I mean, everything he does well and he’s like a really good person and it’s really easy to go and run through a brick wall for a coach that you believe in."

As far as protecting Fields, the Bears believe they have this covered. They’ll need to prove it, just as they’ll need rookie wide receiver Velus Jones and veteran receiver additions such as Byron Pringle and Equanimeous St. Brown to prove they can complement top receiver Darnell Mooney.

Lining up with second-year tackles Larry Borom and Teven Jenkins in starting spots, and with former Bears center Sam Mustipher at right guard is not quite the same as bringing in a group of first-round linemen and top free agents to block for Fields.

"I mean, it should be extremely competitive, that’s at every position," Getsy said.

The Bears are counting on competition to bring out the best in an unproven line that is still forming. On Tuesday, they signed free agent tackle Shon Coleman to add to their competitive mix.

"That’s what we’re in here doing every single day, is giving guys an opportunity to compete," Getsy said. "There’s no jobs that are locked up right now. When you get the pads on, that’s when real ball starts.

"Everything will be evaluated about that, right? The way they get off the football, the way they execute, their mentality, their finish — all that stuff is going to get evaluated. I’m excited to see that."

The receiver group they’ve given Fields consists of well-travelled veterans such as Dante Pettis, Tajae Sharpe and David Moore besides the lower-cost free agents they signed.

It’s third-round pick Jones who has created some excitement at Halas Hall. Jones signed his rookie contract on Tuesday.

"I think he has hunger," said passing game coordinator and receivers coach Tyke Tolbert. "And you hit the nail right on the head: he has maturity. He already has his master’s degree. So he’s a smart guy, mature beyond his years, takes his job very seriously."

Backup quarterback Trevor Siemian calls it a matter of proving to skeptics they can support their quarterback, and they won’t get the real opportunity until September.

"He’s got all the tools," Siemian said of Fields. "We’ve gotta play well around him and give him a chance. But yeah, he’s got everything."