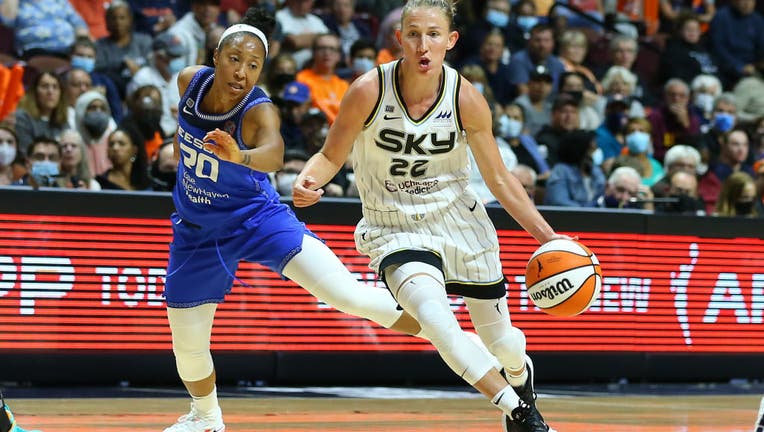 Chicago is back in the finals for the first time since 2014 despite finishing the regular season with a .500 record.

"It means so much. Looking up into the stands and seeing familiar faces," Parker said of getting to the Finals with her hometown team. "I grew up playing in front of these people. It really is emotional. It’s not done yet. Sometimes you have to stop and think and appreciate this moment."

The Sky, who held a seven-point lead heading into the fourth quarter, opened the period with an 8-2 run to put the game away.

Astou Ndour-Fall hit a layup under the basket with 4:41 remaining, pushing Chicago’s lead to 13 points. Parker then got the home crowd roaring after nailing a seven-footer, making the Sky’s victory all but official.

Jonquel Jones led the way for the Sun with 25 points and 11 rebounds. Natisha Hiedeman added 16 points off the bench, hitting five 3-pointers.

Connecticut was able to trim the deficit to three in the second quarter, but the Sky then finished the half on a 16-6 run. The Sun would never get closer than that the rest of the way.

"A sad and disappointed locker room," Chicago coach Curt Miller said. "It’s a disappointing eight-day stretch where we were outcoached, outplayed. We just couldn’t get enough disruption on their really, really talented offensive weapons. Just felt like we were always on our heels this series."

It was the first time that the No. 1 seed hasn’t reached the finals since the WNBA changed its playoff format in 2016.

Chicago native Chance the Rapper and Hall of Famer Scottie Pippen took in the game.

Connecticut guard Briann January missed the game after injuring her ankle. She tried to warm-up but couldn’t play. January had been key for the Sun’s defense in the first few games.

Chicago now awaits the winner of the other semifinal between the Las Vegas Aces and the Phoenix Mercury.