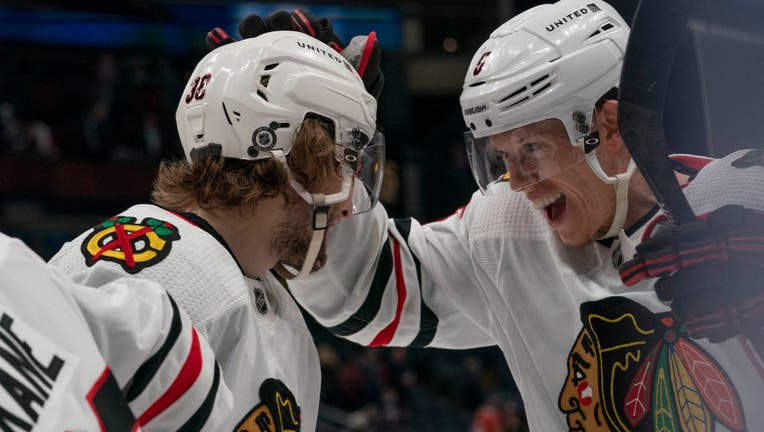 Brett Connolly, Adam Gaudette, Riley Stillman and Vinnie Hinostroza are in, along with an assortment of prospects and draft picks.

Balancing a surprising season with a focus on the future, the Chicago Blackhawks were one of the NHL’s most active teams ahead of the league’s trade deadline. Now the focus shifts to coach Jeremy Colliton as he tries to incorporate the new pieces while keeping the team in contention for a playoff spot.

The Blackhawks beat the Blue Jackets 4-3 in overtime Monday night in Columbus, moving within two points of idle Nashville for the final playoff spot in the Central Division. Connolly scored and Stillman played more than 21 minutes in their first game with their new team.

"I thought they were both good," Colliton said. "They brought energy and they of course were excited for the opportunity. They’re happy to be here and provide some energy for us."

While the flat salary cap, COVID-19 restrictions and the looming expansion draft created a more complicated landscape than most years, the Blackhawks made four more trades ahead of Monday’s deadline.

Janmark was shipped off to Vegas as part of a three-team trade with San Jose that netted Chicago a second-round pick in 2021 and a third-rounder in 2022. The Blackhawks retained 50% of Janmark’s salary-cap hit and parted with a fifth-rounder in 2022 as part of the deal.

Highmore was dealt to Vancouver for Gaudette. Soderberg was traded to Colorado for Josh Dickinson and Ryder Rolston. Madison Bowey also went to the Canucks in a minor deal that included Chicago’s fifth-round pick in this year’s draft in exchange for a fourth-rounder.

The flurry of moves comes after Chicago completed two trades with Florida earlier in April. Hinostroza returned to his first NHL team in exchange for Brad Morrison. The Blackhawks reeled in Connolly and Stillman last week, also acquiring the rights to Henrik Borgström and a seventh-round pick in the 2021 draft while sending Wallmark and defenseman Lucas Carlsson to the Panthers.

"It’s really consistent with what we’ve been trying to do going back to the offseason, which was, you know we’re trying to rebuild our asset pool and we’re trying to bring in some young players," general manager Stan Bowman said.

"I think we did what we set out to do, and when that happens, usually you’re really excited about that."

Bowman was cognizant of the Blackhawks’ position in the standings in making the moves.

"Having some NHL players come in to replace those guys is hopefully going to be able to allow us to just keep going where we are," he said. "It’s within sight."

The 6-foot-3 Borgström might be the most intriguing player acquired by the Blackhawks this month. The 23-year-old center was selected by Florida in the first round of the 2016 draft. He is playing in Finland this year after collecting nine goals and 10 assists in 58 games with the Panthers over the past three seasons.

Borgström starred at the University of Denver before he was drafted, and Bowman is hoping to sign him for next season.

The Blackhawks also acquired another center in the 24-year-old Gaudette, who set career highs with 12 goals and 21 assists in 59 games last season. Gaudette hasn’t played since March 24 because of a COVID-19 outbreak on the Canucks.

"We’ve got a really nice stable of young defensemen ... and then with the recent moves, I feel like our center group is coming along as well," Bowman said.

Gaudette is looking to return to form after managing just four goals and three assists in his first 33 games this year. Same for the 28-year-old Connolly, who had just two goals and two assists in 21 games with the Panthers.

"It wasn’t working. But that’s in the past, and I’m moving on," Connolly said. "I’m honored to wear this jersey. When I found that it was Chicago, I was obviously extremely excited. ... I’m looking to come in here and help the team get in the postseason, and then be a big part of that."