ST. LOUIS - Matt Duffy extended his hitting streak to a career-high 13 games with a pair of run-scoring singles to help the Chicago Cubs to a 3-2 victory over the St. Louis Cardinals on Sunday in a game that was halted after seven innings by rain.

Tommy Edman homered for St. Louis, which will face Los Angeles in the NL wild-card game on Wednesday. The Cardinals removed regulars Paul Goldschmidt and Nolan Arenado after two innings to rest for that.

The Cardinals closed the regular season by winning 19 of their final 22 games, with a franchise-record, 17-game winning streak from Sept. 11-28. They will be participating in the postseason for the third year in a row. 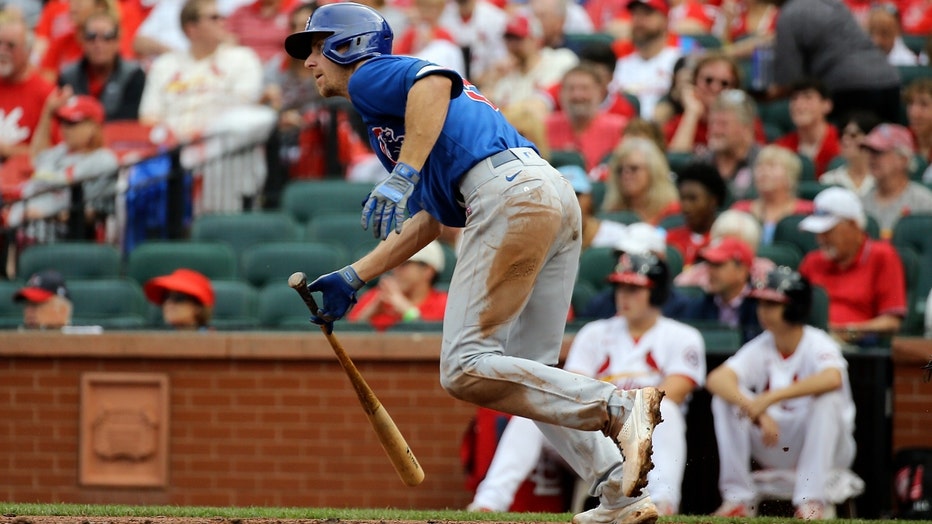 Matt Duffy of the Chicago Cubs hits a two-run single in the fifth inning against the St. Louis Cardinals at Busch Stadium on October 3, 2021 in St. Louis, Missouri. (Scott Kane/Getty Images)

Duffy broke a 2-all tie with a run-scoring hit in the fifth.

Edman ripped the first pitch over the wall in left leading off the first. It was his third leadoff homer of the year and sixth for the Cardinals.

Joe Biagini (1-0) picked up the win with three innings of scoreless relief in his season debut.

The Cubs used a major league-record 69 players this season. Catcher Tyler Payne and Biagini made their debuts on Sunday.

Cardinals long-time broadcaster Mike Shannon was honored in a ceremony before the game. Shannon, 82, called his last game on Sunday after 50 years behind the microphone. He is the 14th announcer in major league history to spend 50-plus seasons as a broadcaster and the sixth to spend that amount of time with the same team. Shannon was a member of the Cardinals’ World Series-winning teams in 1964 and 1967.

A season-high 46,525 fans saw Sunday’s relatively meaningless contest. The Cardinals averaged 26,282 per game and are one of six team to pass the 2 million mark this season.

Cardinals: C Yadier Molina started for the second game in a row after missing four games with a sore shoulder.

Cardinals: RHP Adam Wainwright (17-7, 3.15) will start for the Cardinals on Wednesday. At age 40, he is the second-oldest St. Louis pitcher to start a postseason game behind 41-year-old Grover Pete Alexander, who started Game 2 of the 1928 World Series.