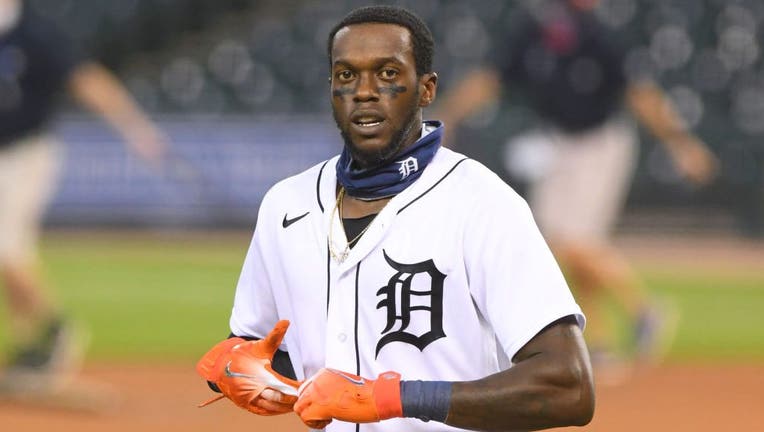 Cameron Maybin #4 of the Detroit Tigers looks on during the game against the Cleveland Indians at Comerica Park on August 15, 2020 in Detroit, Michigan. The Indians defeated the Tigers 3-1. (Photo by Mark Cunningham/MLB Photos via Getty Images)

CHICAGO - The Chicago Cubs acquired veteran outfielder Cameron Maybin and two left-handed relievers in three trades on Monday, adding some help for their pursuit of their first division title since 2017.

“Left-handed relief and right-handed hitters that can hit left-handed pitching, those were two of the main goals we had for the deadline,” general manager Jed Hoyer said.

The addition of Maybin gives the Cubs a glut of outfielders on the roster. They also acquired infielder/outfielder José Martínez in a trade with Tampa Bay on Sunday, but he likely will get most of his playing time at designated hitter.

Hoyer said the team plans to send Albert Almora Jr. to their alternate training site in South Bend, Indiana, clearing out at least one of those outfielders.

“Albert hasn’t gotten consistent at-bats and I think as a result, I think it’s just been a challenge for him to play sporadically and be able to produce,” Hoyer said. “I think sometimes a veteran player like a Cam Maybin at this point in his career is used to coming off the bench.”

The Cubs also have lefties Kyle Ryan and José Quintana in their bullpen, but Quintana could return to the rotation after Tyler Chatwood left Sunday’s 10-1 victory at Cincinnati with right elbow discomfort.

Hoyer said Chatwood had an MRI and is heading to the injured list, but the team is hopeful he will be able to return this season.

Chafin has been sidelined by a left finger sprain. He recorded an 8.10 ERA over his first 11 appearances this year.

“He’s cleared to throw right now,” Hoyer said. “The hope would be a couple weeks. We’ll find out more when we get a chance to see him ourselves.”

Chafin and Osich each do well against lefty batters. Chafin has limited lefties to a .230 batting average for his career. Osich’s number is .231.