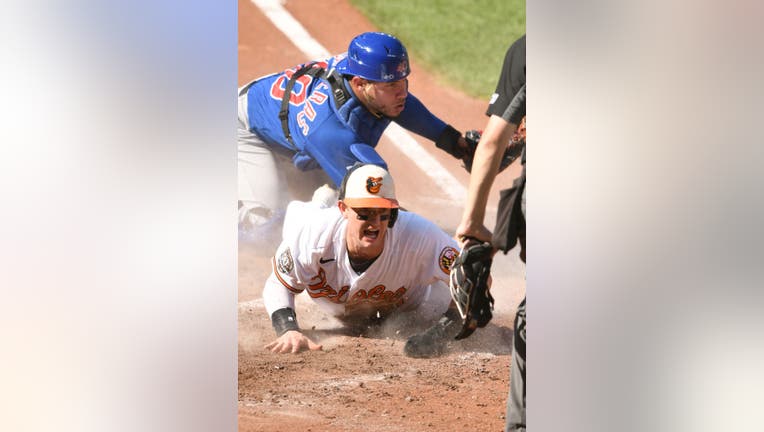 BALTIMORE, MD - AUGUST 18: Willson Contreras #40 of the Chicago Cubs tags out Austin Hays #21 of the Baltimore Orioles trying to score on a Jorge Mateo #3 hit ball in the fifth inning during a baseball game at Oriole Park at Camden Yards on August 18

Contreras had his 10th multi-homer game, which ranks second among Cubs catchers behind Gabby Hartnett (14).

Rafael Ortega also homered for the Cubs, who have won five of seven.

Brandon Hughes picked up his first career save by getting a double play on a soft liner by Cedric Mullins in the ninth.

The Orioles entered the day 1 1/2 games out of an AL wild-card spot. They now play a three-game series against division rival Boston, which concludes with Sunday’s Little League Classic in Williamsport, Pennsylvania.

Thursday’s game was a makeup of a rainout on June 8.

The game was scoreless in the fifth when Baltimore’s Austin Hays hit a one-out double and Rougned Odor had an infield single. Jorge Mateo attempted a squeeze bunt, but Sampson flipped the ball with his glove to catcher Contreras, who tagged out Hays before he could score. The Orioles challenged the play but it was upheld.

Contreras then gave the Cubs a 1-0 lead in the sixth with a solo shot off Spenser Watkins (4-3).

Ortega and Contreras gave the Cubs some cushion with back-to-back homers in the eighth off Joey Krehbiel.

Watkins allowed one run and five hits with no walks and two strikeouts over 5 2/3 innings.

Cubs reliever Sean Newcomb walked the first two batters in the eighth and was replaced by Erich Uelmen, who allowed an RBI single to Ryan Mountcastle that cut the lead to 3-1.

The Orioles pulled to within a run on a sacrifice fly by Anthony Santander.

Uelmen then got out of the jam. Third baseman Zach McKinstry threw out Mouncastle at home on a grounder by Ramon Urias, and Ryan McKenna struck out..

Cubs: OF Michael Hermosillo (quad) is starting a rehab assignment as the designated hitter in the Arizona Complex League. ... RHP Manny Rodriguez (elbow) allowed one and two hits with two strikeouts in one inning for Triple-A Iowa on Wednesday.

Orioles: Santander was the DH in an effort to keep him fresh and healthy.