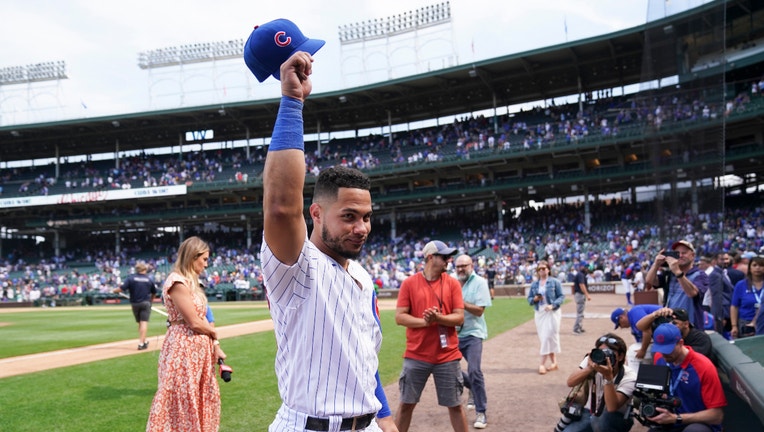 CHICAGO, ILLINOIS - JULY 26: Willson Contreras #40 of the Chicago Cubs waves as he heads to the clubhouse following his team's win over the Pittsburgh Pirates at Wrigley Field on July 26, 2022 in Chicago, Illinois.The Cubs defeated the Pirates 4-2. (

CHICAGO - Willson Contreras drew a standing ovation in perhaps his last home game at Wrigley Field, then keyed an early burst as the Chicago Cubs beat the Pittsburgh Pirates 4-2 Tuesday for their season-high sixth straight win.

Contreras, one of three members left from the 2016 World Series title team, tipped his cap after being cheered at the plate his first time up. He hit a soft single to center field in a three-run first inning off Bryse Wilson (1-6).

"When I started hearing it the first at-bat, it was amazing," said Contreras, who hugged his teammates and coaches on the field after the game. "I tried to enjoy it as much as I could and took it all in."

Contreras, an All-Star catcher who can become a free agent after this season, has acknowledged this might be his last homestand as a member of the Cubs before the Aug. 2 trade deadline. He saluted the fans with a fist in his last at-bat in the seventh but struck out against reliever Tyler Beede.

"Getting traded to a team that’s going to compete is very good," Contreras said. "If the Cubs get a good package for me to make this team better, they’re going to do it.

Representatives from the Blue Jays and White Sox were in attendance.

Seiya Suzuki, Ian Happ and Nico Hoerner hit consecutive doubles in the first to give Keegan Thompson (8-4) ample run support. Suzuki provided insurance with a homer in the eighth off reliever Will Crowe.

"That was as good as we’ve seen Keegan," manager David Ross said. "He continues to build."

Mychal Givens pitched the ninth to earn his second save. Closer David Robertson wasn’t used for the second consecutive game after earning a win and save Saturday and Sunday at Philadelphia.

"He wasn’t an option," said Ross, who informed Robertson of his intentions before the game.

The Pirates have lost four of five.

Thompson retired 16 of 18 batters before Hoerner committed a fielding error at shortstop with one out in the seventh, and 6-foot-7 rookie Oneil Cruz followed later with a two-run homer to center field.

Thompson completed the inning without further damage to top his previous high of 6 1/3 innings against the Reds on June 28.

Since the All-Star break, Cubs starters are 2-0 with a 2.03 ERA. Thompson has allowed two earned runs or fewer in five of his last seven starts.

After Hoerner’s double, Wilson retired 14 of the next 17 hitters.

THANKS FOR THE MEMORIES?

Ross acknowledged that Contreras looked distracted during Monday’s game, in which he shed tears later after being asked to reflect on his seven seasons with the team.

"When he came up, he was a happy young man, lot of smiling, fitting in very easily, showing off the absolute cannon he had all the time," Ross said of Contreras, who made his debut midway through the 2016 title season.

That was Ross’ final season as a player, and he recalled Contreras taking over his specific duties of catching veteran left-hander Jon Lester.

"It was a big deal when he caught Jon," Ross said. "I know that was something he took pride in and probably learned a ton. I think you learn in the moment as much as I’ve noticed a growth in him in being able to read the game."

The Pirates will send RHP Zach Thompson (3-7, 4.64 ERA) when they open a four-game series Thursday against the Phillies.

The Cubs will start LHP Justin Steele (4-6, 4.02) in the first game of a four-game series Thursday against the Giants. Steele allowed one run in five innings in a 15-2 win Friday over the Phillies.