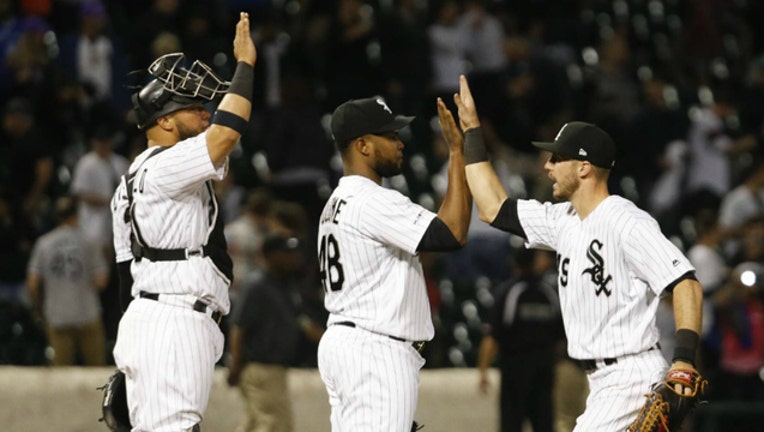 Then he locked in and executed perfectly.

Yolmer Sanchez raced home from third base with the tiebreaking run on Cordell's suicide squeeze in the eighth inning, and the White Sox topped the Toronto Blue Jays 4-2 Thursday night for their fourth win in five games.

With runners at the corners and the infield in, Cordell bunted to the first base side. Toronto reliever Derek Law (0-1) threw to catcher Danny Jansen, but Sanchez slid under the tag to give Cordell his second RBI of the game and Chicago a 3-2 lead.

After twice getting signs for a safety squeeze and taking a ball when he could swing away, Cordell said Law's low pitch was just what he was looking for.

"I've had a couple of them now, safeties, not the suicide squeeze, so it was a little different," Cordell said. "Fortunately I got a decent pitch to put the bat on the ball.

"When I got to first base and looked in and see the dugout going nuts, that's a real exciting thing."

Charlie Tilson then scored on Leury Garcia's sacrifice fly. Tilson was originally ruled out on Billy McKinney's throw, but the call was overturned following a replay review.

Kelvin Herrera (1-2) pitched around two walks in a scoreless eighth to get the win. Alex Colomé tossed a perfect ninth for his ninth save in nine chances, completing a two-hitter.

Welington Castillo also drove in a run for Chicago.

Freddy Galvis hit a solo shot for his sixth homer and first in more than a month, but the Blue Jays lost for the fourth time in five games as their offense continued to sputter. Toronto entered with a major league-worst .216 batting average.

"It's been a struggle for our offense. Can't explain it," manager Charlie Montoyo said. "But the positive side is that (Marcus) Stroman gave us a chance. He was outstanding."

Stroman permitted two runs (one earned) and seven hits through six innings, striking out six. He hasn't won since April 19 and was hit hard in his previous three outings, giving up 12 earned runs over 14 1/3 innings.

White Sox starter Dylan Covey allowed two runs (one earned) on two hits and a pair of walks in 5 2/3 innings in his best outing this season. After giving up Galvis' homer and Brandon Drury's single to start the second, the right-hander retired 12 straight until Eric Sogard walked leading off the sixth - and came around to tie it at 2 with an unearned run.

Covey entered with a 5.91 ERA and was roughed up for four runs in 4 2/3 innings at Toronto last Friday when he walked five.

"For me today it was just to attack the zone and not let walks beat me, "Covey said. "Just throw strikes, pound the (strike) zone and let the defense play."

The White Sox jumped out to a 1-0 lead in the first on Castillo's RBI single with two outs. Galvis led off the second with his drive to right-center.

Toronto pushed across a run without a hit in the sixth to tie it at 2 and chase Covey.

Sogard scored from third with two outs when third baseman Yoan Moncada fielded Randal Grichuk's sharp grounder, but threw wide to first for an error. Evan Marshall entered and got Galvis to ground out.

Toronto recalled INF Richard Ureña and optioned struggling OF Teoscar Hernández to Triple-A Buffalo. In 39 games with the Blue Jays, Hernández hit .189 with three homers and 15 RBIs. Since May 1, he was batting just .114 (4 for 35).

Ureña started the season with the Blue Jays and entered Thursday hitting .313 in 11 games during two stints with Toronto this year.

McKinney smacked hard into the left field fence catching Sanchez's drive in the fourth, then somersaulted forward, landed on his feet and threw back to the infield in one motion.

Blue Jays: Clayton Richard (right knee stress fracture), one of four Toronto starters on the injured list, threw a bullpen. Before the game, Montoyo said Richard might make his Blue Jays debut in Chicago on Saturday, but afterward announced the left-hander would first make a rehab start in the minors. Montoyo didn't yet know where. Toronto acquired the 35-year-old lefty and cash from the Padres for OF Connor Panas last December.

White Sox: SS Tim Anderson was held out of the starting lineup for rest, but was available off the bench. ... LHP Manny Bañuelos, who left Tuesday's loss to Cleveland in the fifth inning with a left shoulder strain, had a "clean" MRI according to manager Rick Renteria and is day-to-day. There is a chance Bañuelos won't miss his next turn in the rotation.