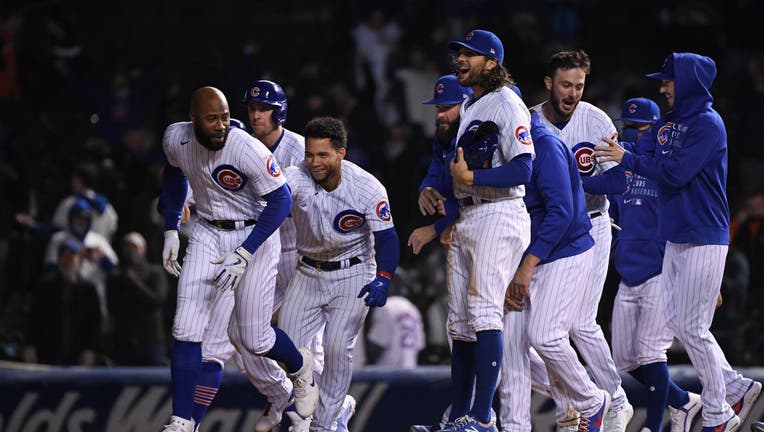 Jason Heyward #22 of the Chicago Cubs celebrates with teammates after his walk off single in the 10th inning against the New York Mets at Wrigley Field on April 22, 2021 in Chicago, Illinois. (Photo by Quinn Harris/Getty Images)

CHICAGO - Jason Heyward had a game-ending, pinch-hit single in the 10th after Dan Winkler stranded the bases loaded in the top of the inning, and the Chicago Cubs beat the New York Mets 4-3 Thursday night to complete a three-game sweep.

Kris Bryant had two hits and two RBIs and Willson Contreras also drove in a run as Chicago beat the Mets for the seventh straight time dating to June 2019.

Pete Alonso homered for New York, which got a stellar outing from the bullpen until Edwin Díaz let in the automatic runner in the 10th.

Javier Báez, who made the last out in the ninth, started the 10th on second. Díaz (1-1) hit Matt Duffy with the first pitch to put two runners on, and David Bote sacrificed them to second and third. Pinch-hitter Eric Sogard was intentionally walked to load the bases.

Heyward then hit for Winkler and hit a sharp grounder into right field.The veteran outfielder usually plays every day, but because New York started consecutive left-handers, his 10th inning at-bat was first appearance since Tuesday.

"To get where we want to as a team, we all have to do things out of our comfort zone," he said. "It was great for me to be able to come through there."

It was the seventh game-ending hit of Heyward’s career.

"We knew at the back end of their bullpen, he matched up well," Cubs manager David Ross said. "It’s rare you get to save a guy for that matchup late in the game."

Winkler (1-0) walked consecutive batters to load the bases with one out in the 10th, but he got Dominic Smith to hit into an inning-ending double play.

"You trust your hitters," Mets manager Luis Rojas said. "Then with the bases loaded with one out, you think you’re going to score.

"It was a tough series. We have to go home and regroup and play good baseball."

The Cubs jumped on top with a three-run third. Contreras had an RBI single off the leg of starter Joey Lucchesi and Bryant added a two-run double.

Alonso’s two-run blast in the fourth trimmed the lead to 3-2. Michael Conforto nearly went back-to-back, but his drive to center hit off the top of the basket, and he settled for a double.

The Mets tied in the seventh on a pinch-hit double by J.D. Davis, scoring Jonathan Villar from first base.

Sean Reid-Foley relieved Lucchesi with three perfect innings, striking out four, and the Mets bullpen held Chicago to two hits and no runs over six innings before the 10th.

Following his defensive struggles in the first two games of the series, Davis didn’t play the field in the finale. Luis Guillorme started at third and made a diving stop on his first chance to rob Ian Happ of a single. Rojas, though, said that Davis will be back in the lineup at third base on Friday night.

"I think he had a good camp defensively, so why give up on him at this point of the season when he’s put so much work in and we’ve seen results in his defense at third?" Rojas said.

Alonso, who won the last Home Run Derby in 2019, said he wants to participate in this year’s event at Coors Field in Denver.

Cubs LF Joc Pederson was placed on the 10-day injured list before the game with left wrist tendinitis. INF Nico Hoerner was recalled from the team’s alternate site to fill the roster spot.

Mets: CF Brandon Nimmo (stiff right hip) didn’t start for a second straight game. He pinch hit in the fourth with runners on first and second and struck out.

Mets: After being pushed back a day, ace Jacob deGrom (1-1, 0.45 ERA) starts the opener of a three-game home series against Washington on Friday night. RHP Erick Fedde (1-1, 5.56) goes for the Nationals.

Cubs: RHP Kyle Hendricks (0-2, 6.92 ERA) pitches the opener of a three-game home series against Milwaukee on Friday looking to bounce back after giving up seven runs and four homers in the first inning last week against Atlanta. LHP Brett Anderson starts for the Brewers.